Dissecting the Deal With Drew Anderman 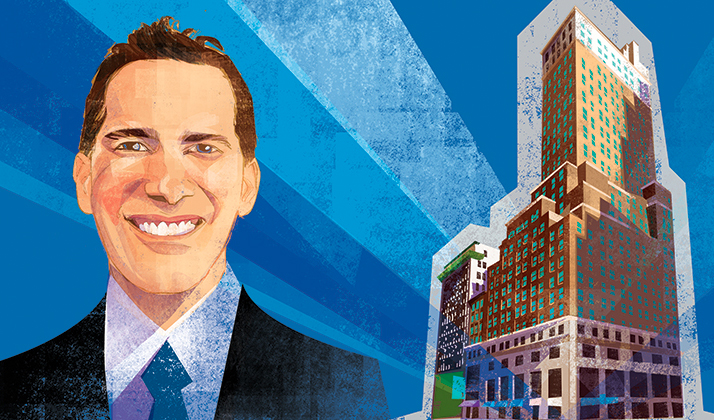 The Moinian Group turned to Drew Anderman and his team at Meridian Capital Group, knowing they had the creative expertise to find the best possible solution at the lowest rate.

Anderman – a 20-year veteran of real estate finance including time at Deutsche Bank, Credit Suisse, CIBC World Markets and Walker & Dunlop and responsible for over $15 billion in commercial financing throughout his career – joined the firm 2 1/2 years ago to augment its institutional capabilities and reinforce Meridian’s position as one of New York’s strongest firms for deals of great size and complexity.

Meridian closed over $35 billion in financing in 2015, negotiating more $50 million loans in New York City in 2015 than any other firm.

As it happened, Anderman’s years of commercial finance and New York market expertise, combined with Meridian’s extensive debt capital markets coverage, were essential for this deal.

In 2006, while with Credit Suisse, Anderman secured the building’s existing loan, leaving him “intimately knowledgeable about this asset as a lender,” and providing him with insight into the client above and beyond what most could expect.

“I knew this was a property the sponsor was probably going to hold forever – that he felt a very strong personal attachment to it given its location,” says Anderman. “I also knew that this deal was extremely important to him and that he was always going to see it through.”

In addition, Meridian had in-depth knowledge of specific area transactions that gave them greater informational leverage to create the best deal possible.

“We’ve done a variety of refinancings and acquisitions along Fifth and Madison Avenues over the past 18 months,” says Anderman, “so we had a tremendous amount of data for those comps and were able to generate a lot of information.”

UNDERSTANDING THE VALUE OF VACANCIES

The building’s recent renovation provided a 15,000 square foot surplus of prime Fifth Avenue retail space that stood empty, or was occupied by month-to-month tenants. Anderman and his team would need to convince lenders of what they and the sponsor believed was the building’s true maximized value, despite the vacancies.

A bright spot for the transaction was that the NBA had signed a 24,000-square-foot lease for their official flagship NBA Store.

Yet this prestigious outlet would not be opening for over a year, and the sponsor wanted the deal secured before the NBA’s build-out was complete.

QUANTIFYING THE POTENTIAL, CLOSING THE DEAL

Anderman and his team did extensive research into local comparables, aided by Meridian and Anderman’s vast experience in the market.

“We looked at other retail leases that were signed from the low-40s to the mid-50s around Fifth and Madison Avenues, and at retail condominium buildings that were being sold or marketed,” Anderman says. “We were validating the business plan and demonstrating that even though we had a fair percentage of the retail space still vacant or month-to-month, it was being done intentionally by the sponsor to maximize the value down the road – to get other tenants after the NBA.”

Based on their research, they were able to exhibit to potential lenders the true value of the remaining retail space, including the total value of the property at full capacity.

“Based on the NBA Store’s lease, and the trend where this part of Fifth Avenue was becoming much more valuable, were able to show that once the rent was computed for the remaining retail space, the real value was substantially higher than it might seem on a straight cash flow basis. We showed that even with the vacant space you would have a relatively low loan-to-value transaction.”

After fielding proposals from a number of prestigious lenders, Anderman and his team were able to secure a $310 million, 10-year fixed-rate interest-only loan for The Moinian Group from Morgan Stanley at under four percent – and all before the opening of the NBA Store.

“We were successfully able to convince Morgan Stanley, amongst other lenders, to look at the cash flow assuming the retail space on Fifth Avenue gets leased,” says Anderman, “which translated into an argument for a lower loan-to-value transaction, less reserves, and a tighter interest rate for our client.”