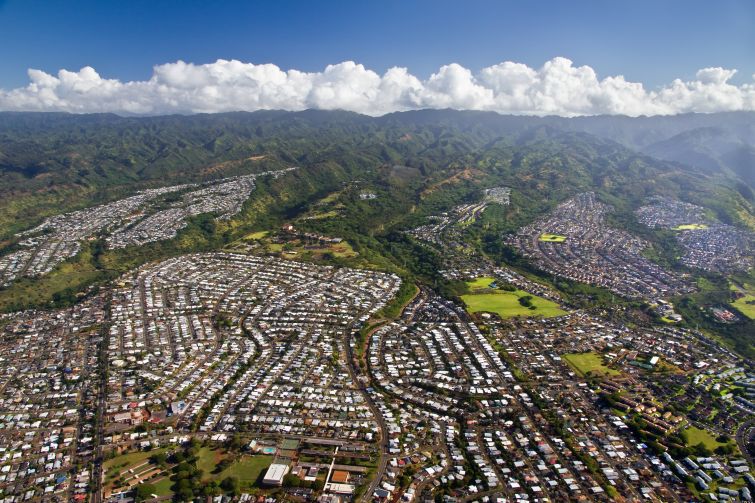 An aerial view of Pearl City on the island of Oahu in Hawaii (Photo: Getty Images).

Sonnenblick-Eichner Company negotiated the life company loan, which carries a fixed interest rate of less than 4 percent and a 10-year term with a 30-year amortization period.

“We received a lot of interest from a wide variety of lenders including traditional banks, investment banks and insurance companies and we were able to leverage our client’s successful track record in Hawaii to secure very favorable terms,” said Elliot Eichner, a principal at Sonnenblick-Eichner.

RPG developed the center—located at 1150 Kuala Street in the suburban neighborhood of Pearl City—in 2010 and is using the proceeds of the financing to replace maturing debt. The property is fully-leased and has a 566-space parking lot. Tenants include AT&T, Babies “R” Us, Domino’s Pizza, Petco, Subway and TJ Maxx.

“We continue to see liquidity in the capital markets for all kinds of retail assets, with well-located community centers like Pearl City Gateway receiving tremendous interest in the marketplace,” said David Sonnenblick, a principal at the brokerage.

The sponsor, RPG, is also in the works with a $767 million, 12-acre master-planned development called “Live, Work, Play, ‘Aiea” on the island of Oahu. The waterfront site is slated to house 1,500 residential units, 220,000 square feet of retail and office space, a hotel as well as restaurants and cafes.
A representative for New York Life was not immediately available for comment, and a call to RPG was not immediately returned.