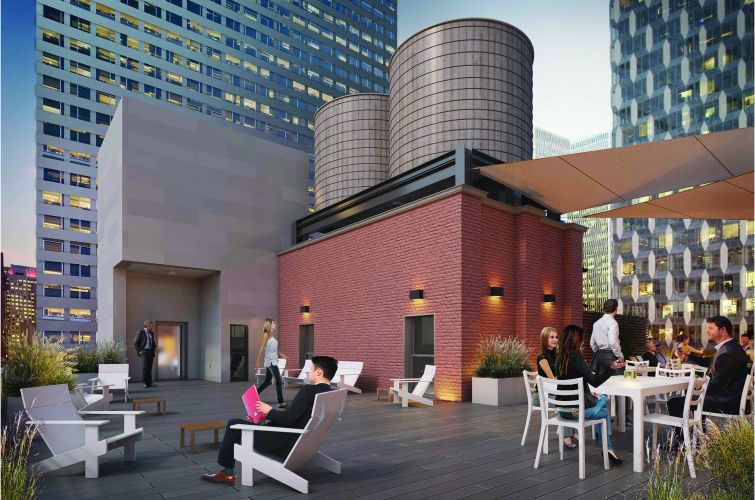 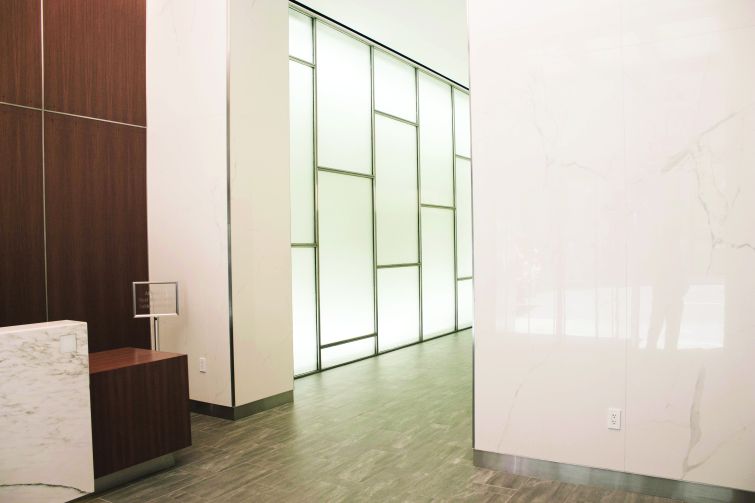 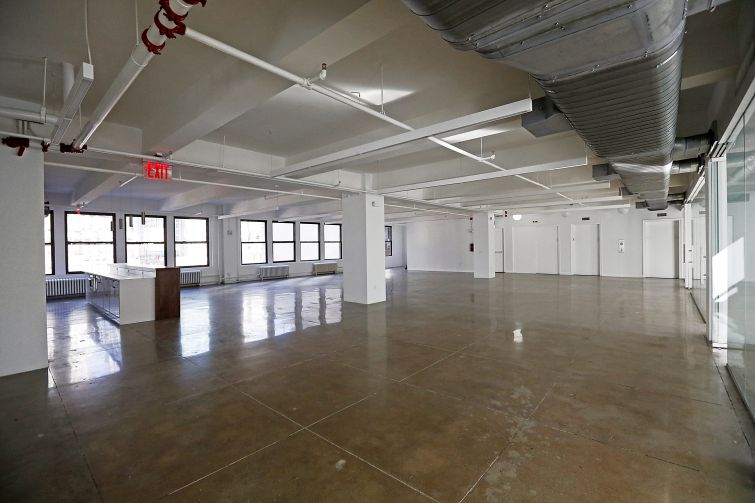 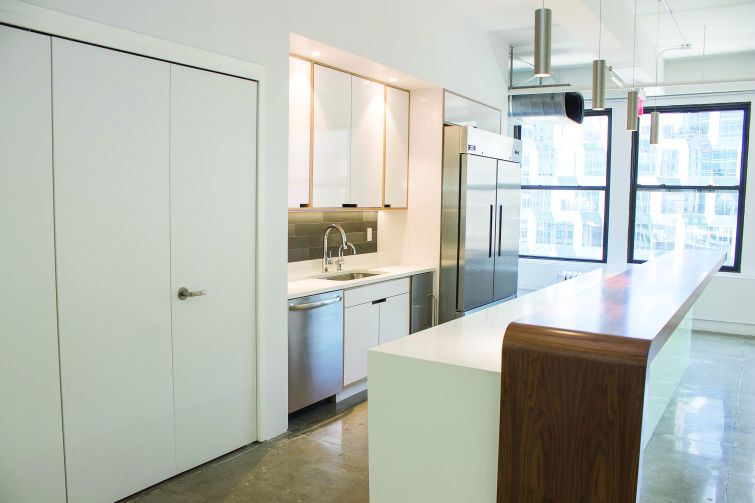 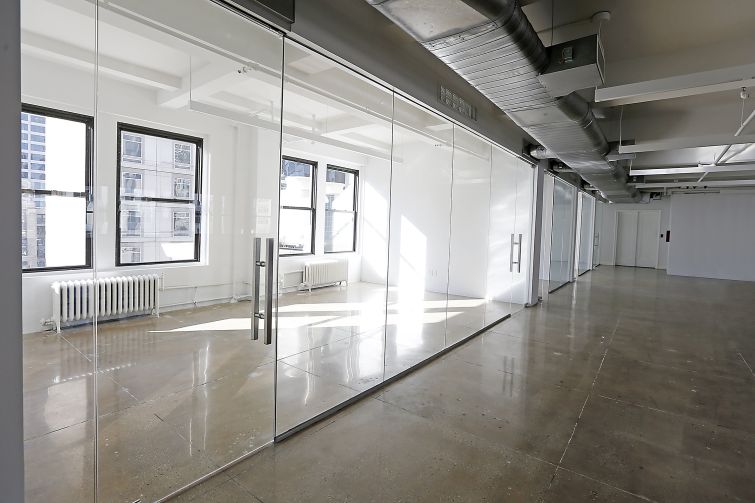 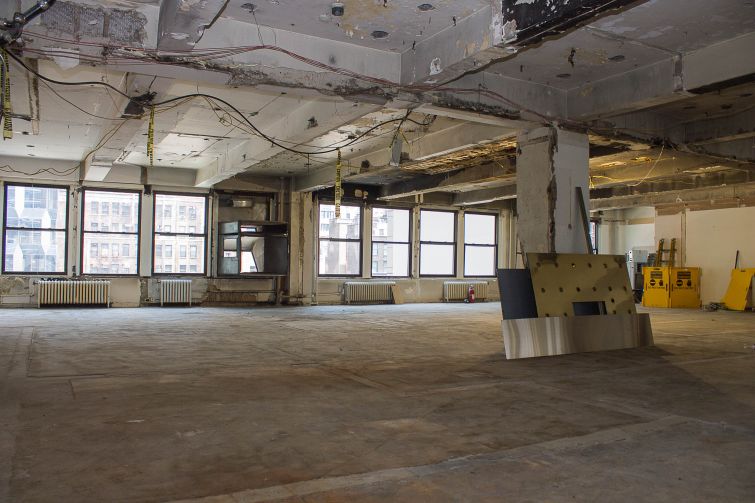 The 14th floor is part of the second phase and still under construction (Photo: Jemma Dilag/ For Commerical Observer). Liam La Guerre
Previous Next

“Dark,” “gloomy,” “cave-like”—sounds like the setting of a short story by Edgar Allan Poe. But that’s how executives from landlord Vanbarton Group described 45 West 45th Street after it acquired the property last year.

The landlord is undertaking a $12 million interior and exterior makeover, since the dingy building, between Fifth Avenue and Avenue of the Americas, that hadn’t seen an update in at least two (probably three) decades wouldn’t attract new tenants at premium rents. Vanbarton purchased the 16-story office building from Samson Management for $81 million in January 2015, city records show.

The dimness problems were primarily in the lobby, which featured little natural light and had unpolished, pinkish granite walls—a style that appears quite frequently in renovated 1980s buildings. After uncovering the dropped ceilings on upper floors, general contractor Vanguard Construction & Development Co. also found ceilings that were crumbling.

In designing various vacant floors throughout the building, Vanbarton decided to take down dividing walls to make full-floor spaces.

“Tenants today are trying to control their brands and culture more so than ever, and having a full floor really enables them to do that,” Ethan Silverstein of Cushman & Wakefield, who is marketing the office portion of the building, told Commercial Observer during a recent tour of the site. “They are not sharing it with anyone else. They can put up any signs they want on their floor.”

The revitalization of the 135,533-square-foot building is being done in three phases, completing by spring 2017. The first phase, which was finished in February, included the revitalization of the façade and bringing the lobby into the light, so to speak. The pinkish granite walls were ripped out and replaced with wood and creamy, white, marble-like porcelain panels.

Glass doors and windows now grace the entrance of the building to allow for more natural light and a canopy was added for branding. Vanbarton also installed three new elevators and a card-reader system supervised by an attending doorman for enhanced security.

Workers demolished the entire fourth and 16th floors in the initial phase, and pre-built the 16th floor for a move-in ready technology, advertising, media and information or TAMI tenant. It features a kitchen with all new appliances, four glass offices and a conference room. It has a loft feel with nearly 11-foot high ceilings and polished concrete floors. Other floors in the building will be redone in a similar fashion.

“We didn’t want it to look like any other Sixth Avenue office building where you’ve got a drop ceiling and carpet,” said Spivak Architects Founder Howard Spivak, who is the architect of record. “We kept the natural feel of the loft building.”

During the second phase, which has a completion date in August, workers will tear down the second, fifth, 11th and 14th floors for renovation. And in the third phase, the landlord will replace the freight elevator with a new one and extend it to a planned roof deck lounge.

Asking rent for building’s office space is in the $60s per square foot.

Another part of the plan is to bring in a restaurant on the ground floor when the current tenant Jack’s World’s lease expires in early 2017.

Jack’s World has a total of 16,346 square feet, divided between the ground, mezzanine and lower level. David Abrams of RKF is marketing the space.

“We think it will fit in with the tenants and serve as a tenant amenity,” said William Bond, a managing director at Vanbarton Group. “We want to create an experience for our tenants from the moment that they are outside the building.”