Construction Site Safety: Here’s What You Need to Know 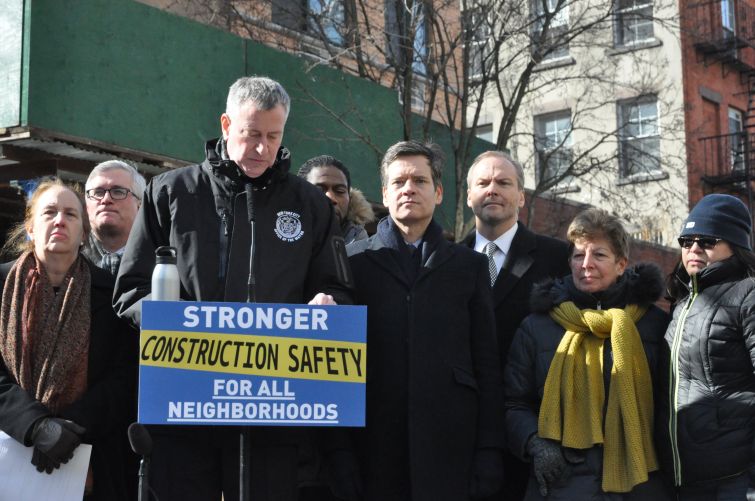 New York City is in the midst of a building boom. According to the New York City Department of Buildings, construction has increased by more than 300% since 2009. In their 2016 annual report, Building Congress President Richard T. Anderson and Chairman Richard Cavallaro of Skanska USA Inc. urged members to double down on safety commitments as a result of this spike in activity. “An increase in worksite injuries and fatalities, particularly on nonunion jobs, has coincided with the recent surge in construction activity,” they said in their statement. “The design, construction, and real estate industry must not treat these occurrences as unavoidable consequences of the building boom. Instead, all stakeholders must strengthen their efforts to ensure that workers are being properly trained and supervised and that best safety practices are being replicated at job sites throughout the five boroughs.” Indeed, the construction boom has driven accidents up by 98% since 2009. Efforts to reduce the risk of accidents on the job have spurred new rules, regulations and initiatives in both the private and public sectors. Here’s what’s happening now.

New Construction Superintendent Regulations Are Put in to Effect

In February 2016, following the crawler crane collapse that killed David Wichs while he was walking to work in Tribeca, Mayor Bill de Blasio and New York City Department of Buildings Commissioner Rick Chandler announced a campaign to increase job safety on construction sites.

The DOB will now require construction superintendents for all major construction projects at buildings less than 10 stories effective May 30th, 2016, with a certain phase-in period to some provisions and exceptions for 1-, 2-, and 3-family new building construction. Failure to comply will result in stop-work orders, penalties from $5,000 to $25,000, or other enforcement measures as necessary.

Previously, a construction superintendent was only required in work sites less than 10 stories for new construction projects. However, these smaller job sites were responsible for the majority of workplace accidents last year (70 percent in 2015), prompting the City to intervene.

– Assure compliance with Chapter 33 of the Building Code

– Notify the Department of accidents, damage to adjoining property, and certain other conditions

Matt Caruso, President of CR Safety, says that the new rule is a good start but there’s still a gap in the system. “The flaw is that one superintendent is allowed to supervise ten projects, leaving less than an hour in a typical work day to ‘supervise’ a job,” Caruso said. “The rule needs to be expanded strictly into safety oversight. A superintendent’s duties are to build a project on-time, on-budget and safely, whereas a safety person is only focused on the latter.”

In celebration of Construction Safety Week, the New York City Department of Buildings hosted an eight-hour conference on May 4th, 2016. In this daylong series of seminars, attended by more than 300 construction professionals and government regulators, department experts discussed industry trends and highlighted safe construction operations. Attendees learned about the latest accident trends and best practices for improving safety. Buildings Commissioner Chandler discussed recently implemented reforms and initiatives to reduce accidents on job sites. He states, “We’re determined to change the mindset that safety violations are ‘the cost of doing business.’”

Topics covered during this event included Protection of Existing Buildings during Construction; Concrete and Formwork in New York City; Cranes, Hoists, and Elevators Safety; and Facades and Retaining Walls.

Construction Safety Week falls on the first full week of May, which coincides with the beginning of Building Safety Month. In 2016, Construction Safety Week reached new heights, with 56 construction companies officially sponsoring the week. Ceremonial safety week “ribbon tying” events were held nationwide to represent construction companies coming together to promote safety. Its mission is to increase awareness of the importance of being committed to safety, every day, and to inspire the best practice to strengthen the construction industry’s safety culture.

Matt Caruso, President of CR Safety, thought the conference was a success. “The safety conference was extremely informative—and the attendance was sold out, which definitely speaks volumes. Safety is a community effort. It requires the top-level executives and the workers to make a job safe. As a company, CR Safety promotes safety stand-downs, holds safety lunch-and-learns on-site, and conducts on-site training and re-training. Our approach is to promote incentive programs to reward safety compliance and increase awareness, and also enforce safety infractions with re-training, fines, and removal from a project.”

Structure Tone, a global construction management and general contracting firm with offices in New York City, also makes it a point to communicate this message to all employees. “We certainly celebrate construction safety during these events, and we think they’re important to reminding everyone about the importance of safety within our industry and with the general public,” said Gary Di Paolo, Senior Vice President of Corporate Safety at Structure Tone. “But we also take safety extremely seriously throughout the year. We communicate that our safety program is built into our operations, not bolted on.”

In light of the February crawler crane collapse, New York City Department of Buildings has implemented a number of new policies regarding crane safety. Earlier this year, Mayor Bill de Blasio and NYC Department of Buildings Commissioner Rick Chandler announced the creation of the Crane Safety Technical Working Group in March. The group’s independent review provides guidance on best practices and recent technological advances that can be implemented to ensure that New York City’s crane operations are among the safest in the nation.

One June 10th, the group proposed 23 regulations, for which they had consulted with stakeholders across the construction industry and workforce. On June 30th, Buildings Commissioner Chandler implemented several of the recommendations, including:

– Crawler crane operations are restricted when winds exceed 30mph, based on on-site measurement of wind speeds

“DOB is implementing these independent recommendations to make New York’s crane regulations—already the strongest in the country—even more effective,” said Buildings Commissioner Chandler in a recent statement. “In the coming weeks, we will be working to enact additional recommendations proposed by the Working Group. The Group’s recommendations are solid, sensible, and doable.”

The Department of Buildings had already enacted and will continue to enforce a number of actions immediately following February’s crane collapse, including increased fines for engineers who use cranes in unsafe wind conditions; increased protection for pedestrians; and improved notification for neighboring residents and businesses.

“The recommendations by the Crane Safety Technical Working Group are a responsible effort to minimize harm for crane operators and the public,” said Council Member Jumaane D. Williams in a press release issued by the Department of Buildings. “The crane collapse that took place earlier this year is evidence that these safety recommendations are needed and should be implemented as soon as possible. We cannot ignore safety just so we can keep up with the construction boom taking place in the City.”

“It’s important for everyone in the industry—from construction crews to engineers—to be informed about the construction environment and what’s happening around them,” said Gary Di Paolo, Senior Vice President of Corporate Safety at Structure Tone. Structure Tone recently hosted the first ever New York City Cranes & Derricks Workshop to discuss the details of the City’s new crane regulations. “We want to help make sure our industry colleagues and partners understand what they mean for their projects and their safety. Managing risk doesn’t cost, it pays,” said Di Paolo.

– 83% of the fatalities investigated each year for the last five years occurred on construction projects managed by non-BTEA contractors.

– 81% of all accidents occurred on projects managed by non-BTEA contractors.

– 65% of Stop Work Orders on high-rise projects were issued to non-BTEA contractors.

– 64% of accident-related violations were issued on projects managed by non-BTEA contractors.

“We released the statistics to show that BTEA contractors are the safest builders in NYC and those independent statistics prove that fact out,” says BTEA President, Louis Coletti. “BTEA contractors are safer because of their commitment to safety which starts in the CEO’s office and emanates to every project manager and trade workforce worker on every site they manage.  BTEA contractors spend millions of dollars on training project management staff, their trade workforce and in providing safety equipment necessary to keep people safe.”

To maintain the highest standards for safety, the 2016 BTEA Safety Agenda includes the expanded use of cocooning and netting on concrete job sites; increased crane operator training; requirement of all workers involved in construction citywide have at least a 10 Hour OSHA card; and mandatory drug and alcohol testing.

A Manhattan construction company has been found guilty of second-degree manslaughter and other charges, following an April 2015 incident at a construction site in the Meatpacking District that left 22-year-old Carlos Moncayo buried alive.

Harco Construction was hired to manage and oversee construction at 9-19 Ninth Avenue, the site of a future Restoration Hardware retail location. New York City Building Code and Occupational Safety and Health Administration (OSHA) regulations require all building excavations deeper than five feet be fortified before permanent support systems be put in place, which is typically done so by sloping or shoring. The trenches at 9-19 Ninth Avenue, which were 14 feet deep at the time of the incident, were not secured by either sloping or shoring methods.

Prosecutors said Harco Construction, owned by Kenneth Hart, ignored multiple warnings about the conditions from inspectors, including the morning of the cave-in. Charges are still pending to other defendants connected to the incident, including Sky Materials Corp., the excavation subcontractor, Alfonso Prestia, SKY’s foreman, and Wilmer Cueva, Harco’s senior superintendent.

“Carlos Moncayo’s death at a Manhattan construction site may have been foreseeable and preventable, but his family can be assured that it will not be in vain,” said District Attorney Vance said in a statement following the verdict. “Today’s guilty verdict should signal to the construction industry ‎that managing a project from afar does not insulate a corporation or general contractor from criminal liability. Just as a supervisor can be held accountable for a safety lapse resulting in a fatality at a factory, construction companies are responsible for the safety of the individuals that work on their projects, regardless of union or immigration status. The safety of our city begins with the safety of those who lay the foundation.”

“This is an historic conviction which we hope will save the lives of workers—as it puts general contractors and subcontractors on notice that it is a new day in New York City and we will not tolerate reckless profit that endangers and kills workers,” said Nadia Marin-Molina, director of New York Committee for Occupational Safety and Health. “We also hope news of this Harco Construction conviction will reach more workers and increase awareness about workers’ rights when faced with unsafe workplaces, of which non-union workplaces are the most dangerous.