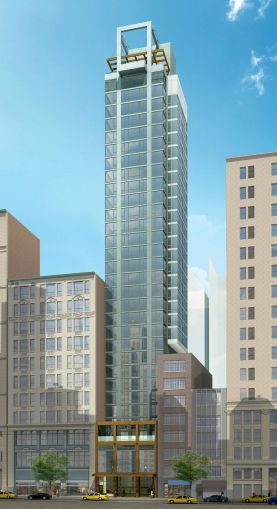 Rendering of the tommie hotel at 11 East 31st Street. dghigliotty

When New York developer Matthew Baron landed a roughly $40 million construction loan for a planned hotel at 11 East 31st Street, next to Manhattan’s Koreatown, it served as further validation that the project would not fall short. The president of the growing real estate firm Simon Baron Development and his capital partner Quadrum Global had enough equity at their disposal to fund the 30-story boutique hotel without debt, he said. But the mortgage, which Puerto Rico’s Doral Bank originated in August 2013—at a time when hotel construction finance had just begun to reemerge post-recession—put Mr. Baron and his company’s founder, Jonathan Simon, into a new class of hoteliers.

Mr. Baron’s longtime friend, mentor and mortgage broker, Jerry Swartz, had negotiated the debt deal with Doral Bank after discussions with several other lenders fell through. Mr. Swartz knew going in that the options would be thin, he said, but that eventually a handful of banks would make their offers. The one from Doral Bank came with a loan-to-cost ratio below 50 percent and a favorable interest rate, according to the borrower and his broker. The biggest catch was that the financing was non-recourse, Mr. Swartz said.

“The loan was enticing for them because there were no personal guarantees,” the 76-year-old co-founder of HKS Capital Partners told Commercial Observer in an interview alongside Mr. Baron, 40, at SBD’s office in Midtown East. “That is hard to come by, even now, since there is obviously no cash flow with a hotel that is being built,” he added.

As with most hotel loans, in order for the lender to move forward with the deal, Mr. Baron and his partners needed to put in all of their equity first. But before the bulk of construction funds from Doral Bank could be drawn upon, local regulators shut the bank down in February 2015—after it buckled under a glut of nonperforming loans—and Banco Popular de Puerto Rico, FirstBank of Puerto Rico and Arkansas’s Conway Bank acquired it in pieces. The breakdown of Doral Bank, which held $5.9 billion in total assets, became the largest bank failure in the U.S. since 2010.

Following the absorption of the bank’s assets, the new holder of SBD’s construction loan opted out of the deal and decided not to provide the funds, Mr. Baron said without naming the bank. “We had the loan lined up, we were funding our equity and as we were approaching what would have been the takedown period, circumstances changed,” he said.

That did not deter the developer and his colleagues from moving forward with their 250-room hotel. An executive at the international private equity firm Quadrum, which has partnered with SBD on other real estate developments, agreed to cover the remaining cost of the more than $80 million construction project, Messrs. Baron and Swartz said. On top of Quadrum’s existing equity in the hotel development, Seth Schumer, a director at the firm, took a lending position in the tommie hotel project and offered his partner even better terms.

“They had an excess of money that they needed to put out and so they were able to provide additional funding below their normal rates,” Mr. Swartz said. “That worked out in the end because the successor lender on the original deal had no interest in doing hotel construction loans.”

This August, Mr. Baron tapped a Cayman Islands-based institution, listed in city records as Cybus Lending Corp. Limited, for a new mortgage to replace the one from Doral Bank. Mr. Schumer of Quadrum signed the loan documents as the mortgagee under Cybus. That deal closed on Aug. 14 and hit city records on Sept. 29.

Mr. Baron, the son of Russian immigrants, spent his childhood in the projects of Coney Island and dropped out of college on his first try because he couldn’t afford tuition. He later earned his bachelor’s degree in finance from New York University’s Stern School of Business in 2003 and his MBA from Columbia Business School in 2007, while working at the mortgage brokerage firm Pergolis Swartz Associates under Mr. Swartz’s guidance.

Starting out in the brokerage business, the Brooklyn native—who had spent brief stints at Chase Bank and Morgan Stanley—held no family ties to real estate and no real industry connections. Mr. Baron later found his footing in the development world after meeting Mr. Simon, who had started his own firm, Simon Development Group, in the early 1990s. The two teamed up in 2006 and Mr. Baron became president of the rebranded company, Simon Baron Development, in 2014. Mr. Simon remains the firm’s chairman and chief executive officer.

SBD now owns 13 properties, mostly residential, totaling more than $1.7 billion, with another seven projects in the works. The tommie hotel, which topped out this summer, is due for completion in mid-2016, according to the developers.

Messrs. Simon and Baron and their colleagues at the time paid more than $27 million to assemble the land at 11 East 31st Street right before the last financial crisis hit, Mr. Baron said. SBD and its partners finally began construction on the hotel in mid-2014—roughly six years later. To make room for the hotel, the developers demolished two existing rental buildings at the site after acquiring the property. But the project stalled during the downturn, due to a lack of available construction financing, and the site changed hands among investors before SBD got the hotel development back on its feet.

Once the project became a sure thing again and Quadrum stepped in to provide initial construction equity, the plan was to have Commune Hotels & Resorts manage the hotel, according to reports from 2012. The billionaire Hyatt Hotels heir John Pritzker, who owned a 50 percent stake in Commune at the time, had been one of the original investors when Simon Development acquired the land in 2007. The project saw other stakeholders along the way. Additional investors at different points included the New York-based real estate fund manager Area Property Partners and the London- and Hong Kong-based alternative asset manager Cube Capital, city records show.

In 2013, Mr. Pritzker and his private equity firm Geolo Capital bought the remaining shares of Commune from New York hoteliers Jason, Michael and Lawrence Pomeranc and launched the boutique hotel brand tommie under the Commune flag. The millennial-minded hospitality chain features smaller rooms and amenities targeted to younger patrons. After further negotiations between the developers and their partners, tommie became the new designated manager for the forthcoming 11 East 31st Street hotel—one of two tommie projects under construction in the city. The other at 503 Canal Street is not being developed by SBD.

Upon completion, the East 31st Street property will contain “high-style, well-thought-out rooms” for people who want to stay in a boutique hotel in New York, but who can’t afford to spend $500 to $600 a night, Mr. Baron said.

“Boutique hotels are often the hardest to finance,” Mr. Swartz told CO. “Some lenders won’t even look at them. Tommie has a powerful name behind it, but when you take the brand by itself, you’re not talking Hilton or Hyatt.”

With the skinny, 30-story hotel near completion, SBD and its partners are now looking at a second hotel opportunity outside of New York, Mr. Baron said without getting into specifics. In smaller markets, successfully completing a hotel development becomes an even bigger challenge, as location and branding become all the more important, he said.

While those criteria matter to some extent in the New York hotel market, lenders view the sponsor’s and the hotel manager’s track records as the most critical factors, according to the developer and his loan broker.

“If I get on the phone and call 10 lenders about a hotel deal right now, the first thing eight of them will ask me is ‘Who’s going to manage it?’ ” Mr. Swartz said. “Even before they ask me ‘Who’s going to build it?’ or ‘Where is it located?’ ”

Mr. Baron’s ability to secure a non-recourse construction loan for his company’s first hotel without a long-established brand behind it was a considerable feat. But his ability to continue the project without another hitch after the original lender failed says something even greater.

“Debt obviously helps your returns, but we didn’t need debt after Quadrum came in,” Mr. Baron noted. “That said, it’s easier to get a loan when you don’t need it. The problem is that most people looking for a loan do need it and more often than not we’ve been on the other side, where we really needed the loan.”

The developer said that while he and his partners expect to turn a substantial profit when their tommie hotel opens for business, they are fully aware of the potential risks in owning and operating a hotel.

“When I complete a rental apartment building, people sign leases for one or two years,” he said. “If there’s a financial collapse, most of them are going to stop paying for their cars, their credit cards and their vacations before they stop paying their rent.

Update: At the time of the interview, Matthew Baron and Jerry Swartz said that Quadrum took a lending position in the project following Doral Bank’s collapse. After publication, Mr. Baron said through a spokeswoman that Quadrum is not the new lender. He declined to name the institution, Cybus Lending Corp. Limited, which is an affiliate of Quadrum. This story has been edited to include the details regarding Cybus.