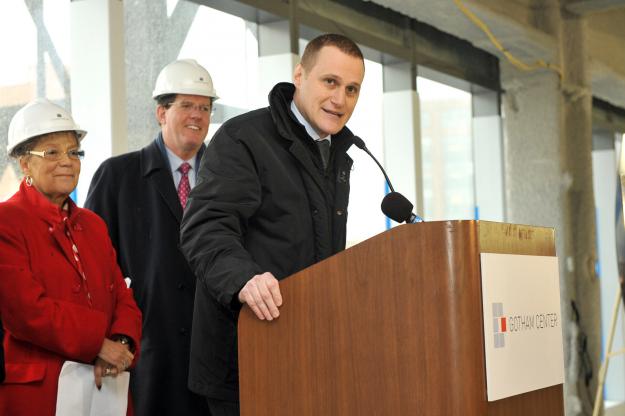 Rob Speyer will assume complete control over Tishman Speyer after splitting the chief executive officer role with his father, Jerry Speyer, for the last seven years.

Before the move, Rob Speyer had served as both president and CEO since 2008, while Jerry Speyer was chairman and CEO. Jerry Speyer, 75, will stay on as chairman of the massive developer and landlord, which owns such properties as Rockefeller Center and the Chrysler Building, the father-son duo announced in a company memo this morning. The move is effective immediately.

“This is a natural progression in the leadership of the firm and one that also reflects the reality of the way we have been running the business since becoming co-CEOs seven years ago,” the two wrote. “As leaders of a private enterprise, we strongly believe in the importance of actively shaping our own future. This means progressive change without losing the continuity of experience and management that is one of our key strengths.”

While the company has had its ups and downs in its 37-year history, it’s been on a development spree in recent years with Jerry and Rob Speyer leading the effort. In August, Tishman Speyer announced it was venturing into Brooklyn for the first time—buying out half of the Downtown Brooklyn Macy’s at 422 Fulton Street for $270 million. The developer had been bidding on the property since Macy’s put it on the market two years ago, a source familiar with the initial bid told Commercial Observer in August. Macy’s will keep its lower five floors, while Tishman Speyer will develop 10 floors of office space above the store.

“As a firm we have never had so many exciting possibilities around the world as we do today—with all the new challenges this also brings,” the two wrote in the memo. “We look forward to continuing to work with all of you to capitalize fully on these opportunities, bringing all our traditional strengths to bear while consistently seeking new, innovative ways to add value to our clients across the globe.”

Rob Speyer, who turns 46 next month, joined his father’s development empire in 1995, after a stints as a reporter for the New York Daily News and the New York Observer. “I used to work at the Observer,” he told CO last January. “1992 and 1993. Look up the clips.”

At age 43, he became the youngest chairman of the Real Estate Board of New York when he took over in January 2013, as CO previously reported. Since joining the company, Rob Speyer has helped turn the company global. In June 2013, the developer closed on Tour Pacific, a 570,000-square-foot office building in Paris.

Jerry Speyer co-founded the company with father-in-law Robert Tishman in 1978, according to his biography on Forbes. One of the company’s largest deals under Jerry Speyer’s leadership was the 2001 purchase of Rockefeller Center, of which he previously held a 5 percent stake. The developer bought out his partners—including Goldman Sachs and David Rockefeller—for $1.85 billion to take full control of the Art Deco cluster of buildings.

But not all Tishman Speyer deals have been as glitzy, or as successful. The firm and partner BlackRock Realty defaulted five years ago on loans backing the Peter Cooper Village and Stuyvesant Town complexes on the Lower East Side eventually losing ownership of the buildings. The 2006 purchase of the 11,200-unit communities for $6.3 billion during the peak of the market made it the largest real estate deal in the United States up until that point. The buyers invested millions to quickly deregulate as many units as possible at the heavily rent-stabilized complex, which had a J-51 tax abatement. Reserve funds began running out and Tishman Speyer couldn’t pay off its debt.

A messy legal battle ensued between the senior and junior lenders on the deal to gain control of Peter Cooper and Stuy-Town. CWCapital, the special servicer, exercised a deed-in-lieu-of-foreclosure in June 2014 and put the property up for sale. Junior lenders sued CWCapital a month later, arguing that it pumped up the bill for the senior lenders—making it appear impossible to pay off. The property still has not been sold off.