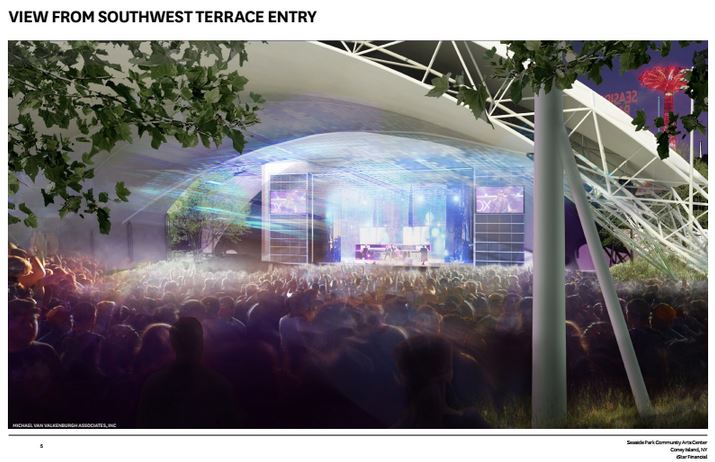 New York City’s Department of Buildings today issued a work permit for iStar Financial to begin construction on its Coney Island beachfront amphitheater and restaurant, together called the Seaside Park and Community Arts Center, city records indicate. The permit allows for renovation of an existing building—the historic, now-vacant Childs Building at 3052 West 21st Street—and construction of a new amphitheater and related roof structure on an adjacent site. The total cost of the boardwalk project is $53 million.

“Every major market in the country has a covered 5,000-square-foot amphitheater,” Karl Frey, the executive vice president of land and development at iStar, told Commercial Observer. “Those tours sometimes skip over New York because we don’t.” He added: “There’s a real hole in the market.”

The three-story, 60,000-square-foot Childs Building will have a restaurant and the adjacent covered amphitheater will have 5,000 seats on the boardwalk, according to a project overview Mr. Frey gave this morning at a Brooklyn development event hosted by Baruch College’s Steven L. Newman Real Estate Institute, Kasirer Consulting and Zetlin & De Chiara.

The Childs Building, which was home to a Childs Restaurant before it vacated the property in 1952, will provide artist green rooms, offices and dressing rooms. A rooftop terrace overlooking the amusement district can hold 320 people.

“We’re building it on a turn-key basis with the city,” Mr. Frey said.

On April 10, the city bought the Childs Building and some of the land from iStar (a portion of the site was already city property), for $16.1 million. The city then leased the entire premises to Seaside Park LLC, a joint venture of iStar and Coney Island USA, a local not-for-profit which is responsible for construction, maintenance and operations. The lease is for 10 years.

Dick Zigun, the founder and artistic director of Coney Island USA, said there will then be a lease agreement for the restaurant operator and then possibly leases for not-profit and for-profit concert providers in the amphitheater.

Mr. Zigun is excited that starting next year Coney Island USA will get to assemble the Mermaid Parade in the amphitheater, rather than on the streets which Mr. Zigun said were “in horrible condition,” and possibly create more related programming there. “There will be shade, vendors, bathrooms, comfort,” Mr. Zigun said.

“We see this as the first major capital investment in the Coney West district since the district was established under the 2009 rezoning and it is intended to spur further mixed-use development in the area by rehabilitating a city landmark and creating active open space, retail, and entertainment uses,” said a spokeswoman for the city’s Economic Development Corporation, which helps the city create affordable housing, new parks, shopping areas, community centers and cultural centers for the city.