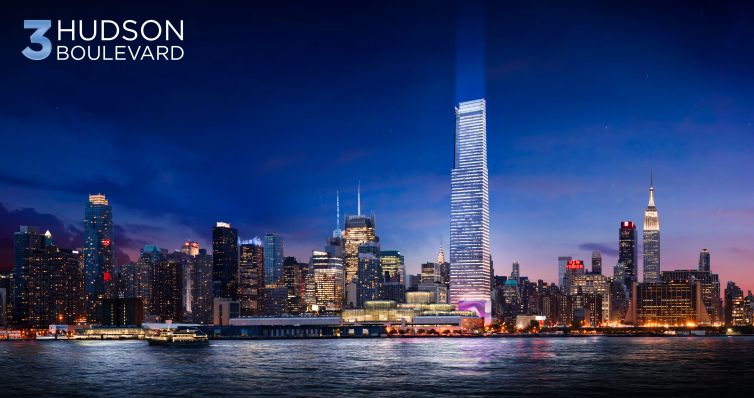 The Moinian Group’s new video for 3 Hudson Boulevard is appealing to the everyday subway rider, as well as the helicopter and Mercedes crowd.

Marketing materials for the glassy Far West Side office tower, between West 34th and West 35th Streets, give an inside view of what the planned building will look like. Among its features are open, shared work spaces and floor-to-ceiling windows that oversee Midtown and the Hudson River. There is a bright open lobby that overlooks a public plaza filled with fountains and greenery.

Mixed into the sweeping views of the building are two potential employees commuting to 3 Hudson Boulevard for your average day of work. The first is a man clad in a gray blazer waiting to get on a west-bound 7 Train, followed by his arrival at the building and finally sitting at a shared desk.

The second character is a woman arriving at a riverside heliport, who proceeds to get into a black Mercedes Benz. She also closes the video in a conference room as dust falls on to views of Midtown featuring the Empire State Building.

Joseph Moinian, the chief executive officer of The Moinian Group, told Commercial Observer last month the building, perched atop the new subway station, should be completed for tenant fit out by 2018. The foundation work is done, he said, and the developer will begin construction in the near future.

An anchor tenant has yet to be secured for the 1.8-million-square-foot tower on West 34th Street, however.

Once it is completed, 3 Hudson Boulevard will be The Moinian Group’s second large structure on the Far West Side. Its residential project, 605 West 42nd Street, has been topped out, and Mr. Moinian said the developer will soon begin leasing on the 1,174 units—20 percent of which are affordable, below market value.