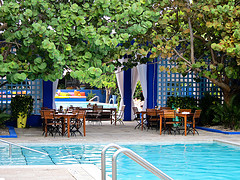 The Shore Club in Miami Beach (Photo: advencap via Flickr)

HFZ Capital refinanced The Shore Club, a luxury hotel in Miami’s South Beach neighborhood, Mortgage Observer has exclusively learned. With the $185 million provided by Banco Inbursa, the Mexican bank run by Carlos Slim, the hotel will be redeveloped, a source close to the deal said.

The financing was arranged by Howard Michaels, chairman of The Carlton Group, a representative for the brokerage confirmed, though the representative declined to confirm the lender’s identity.

HFZ acquired the 309-room hotel for about $175 million at the end of 2013, according to previous reports. The firm plans to reposition the asset, converting the hotel to 85 residential condominiums and 100 hotel rooms. HFZ hired Douglas Elliman to market the residences last year, according to a report from The Real Deal.

The deal closed in mid January, the rep said.

A call to HFZ was not immediately returned; representatives for Inbursa were not reachable.