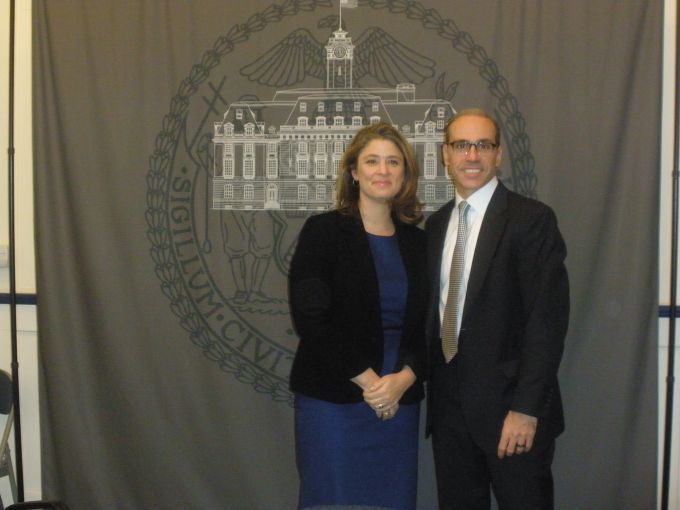 As Mayor Bill de Blasio mentioned in his State of the City address this week, the administration is conducting a rezoning study for the Bay Street corridor in Staten Island, to aid in revitalization efforts in the area.

In a display of partnership, Deputy Mayor Alicia Glen joined Staten Island Borough President Jimmy Oddo this morning at Staten Island’s Borough Hall to speak to the press about what this means for Staten Island’s future.

“We are seeing $1 billion in investments in Staten Island,” said Mr. Oddo. “It’s unprecedented. It’s not a hyperbole to say this is a historic moment for the island.”

Amidst all the money going towards Staten Island’s new look, Mr. Oddo and Ms. Glen fielded questions about how new apartments might affect residents, and, in particular, the owners of the warehouses dotting Bay Street, whose buildings stand in contrast to developers’ visions of the corridor’s future.

But resistant warehouse landlords who feel pressure to leave are likely not to be an issue, according to Nick Miscigna, an associate broker at Robert Defalco Realty, which specializes in industrial properties.

“If I had a property along that corridor, I’d be very grateful because I’d make a lot of money,” Mr. Miscigna said. “Properties that are worth $250,000 there today could see valuations in the millions within a few years, which is why owners along that route are holding onto their properties now.” (Indeed, Commercial Observer found only one listing in the area, after poking around various real estate listing websites.)

Asked in the meeting if the warehouse owners would sell, Mr. Oddo said that he can’t speculate but that he would “assume those transactions would happen.”

Mr. Miscigna said that depending on how the rezoning goes, some industrial property owners could walk away with even more if the their land falls on a C4 classified zone, which would allow them to add stories on to their buildings, increasing the square footage—and thus the asking price.

“I don’t think that any of the existing businesses should look at any potential rezoning in a bad way, as the underlying value of those properties will actually go up,” said Mr. Oddo.

Ms. Glen also confirmed that businesses with manufacturing facilities or warehouses in use don’t have to worry about being pushed out, as they will be grandfathered in.

Another reason industrial owners might want to sell is that manufacturing on Staten Island is quite difficult, said James Prendamano, a managing partner for Casandra Properties, which is the leasing and marketing agent for new shopping center Empire Outlets.

“We lack the capacity to bring in materials off-island and get the manufactured products off the island,” said Mr. Prendamano. “Maybe it wasn’t burdensome 50 years ago, but it is now, especially in the north corridor.”

Mr. Prendamano said that while industrial property owners will stand to make a profit, he’d stop short of saying prices are going to skyrocket—because how areas are zoned will make a difference in what owners walk away with. If a parcel is zoned for lower income housing, rental income will obviously be lower, and so will pricing. On the other hand, developers who build affordable housing will receive more subsidies than the ones that build luxury condos, for example.

“What are the subsidies going to be?” said Mr. Prendamano. “The jury is still out.”

Mr. Prendamano, who grew up on Staten Island, said reception from the locals has been mostly positive. “For the most part, the community is open to the developing … but we need to see more details of how this will be rolled out. But I haven’t heard anyone screaming about this plan.”

Both the deputy mayor and the borough president stated several times that they are placing a strong emphasis on affordable housing, perhaps quelling fears that current residents will be priced out of their homes.

“When the mayor began talking about affordable housing, he said it was a five-borough plan,” said Ms. Glen. “Very early on [Jimmy Oddo] approached me and said he wanted to work with us. We don’t want to just accommodate new residents, but also the growing population here. We need a different kind of housing if you want your kids to come back to live here after college.”

Ms. Glen said the administration intends for the procedure to be a “community-based process,” that looks at things like how many school seats are needed and taking the island’s growing senior population into consideration.

The changes, Ms. Glen said, “Will not come at the expense of the local community being displaced.”

“This is a net positive for Staten Island,” said Mr. Oddo.