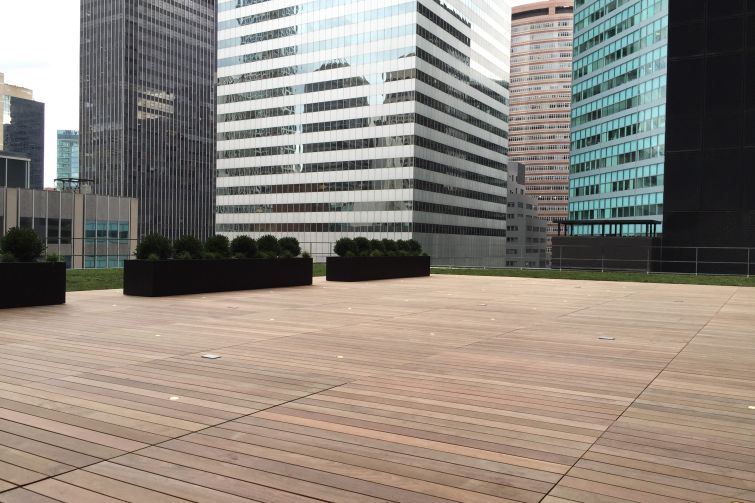 The new exclusive terrace on the 11th floor of 375 Park Avenue. (Tobias Salinger)

Before executives in the Seagram Building get to start flocking to the $4 million members-only 11th-floor lounge and terrace RFR Realty installed for them, Commercial Observer peeked into the art-filled living room area and tested the balcony’s rarefied air.

RFR’s Sheldon Werdiger invited CO for a tour of the 5,000-square-foot lounge area and 7,280-square-foot outdoor deck on a formerly-utilitarian platform where the brass and glass Ludwig Mies van der Rohe gem at 375 Park Avenue tapers into its tower floors.

Officials at RFR dreamed up the travertine-walled lounge a year ago in an effort to enhance the modernist masterpiece that already boasts a Four Seasons, a Brasserie restaurant, world-class art and a roster of prestigious financial firm tenants, Mr. Werdiger said.

“It’s so hard for us to improve on something that’s this good,” Mr. Werdiger said. “Now, we’re offering this lounge and rooftop terrace, which is just one more feature.”

Before the end of the year, top-ranking officials from the tenant companies will be able to use their building identification cards to access the dedicated elevator car to the new lounge. There they’ll enjoy easy-chair service from the building’s restaurants, wine refrigerators stocked with the beverages of their choice and a complimentary snack pantry designed like one RFR officials currently enjoy on the opposite corner of Park Avenue and East 53rd Street at the company’s Lever House.

On the Brazilian Ipe hardwood deck, four electric heat lamps will allow members to lull well into winter next to a 4,500-square-foot sedum grass planting among the area’s skyscrapers and gaze upward along the precise geometric i-beams of the building’s eastern side.

They’ll also get to peruse a set of illustrations of life at 375 Park by artist Ruben Toledo in the corridor outside the lounge. The pictures, one of which depicts sophisticated executives relaxing in the Studios Architecture-designed space, serve to humanize the “serious building,” Mr. Werdiger said.

“It can be intimidating in the way it presents itself on Park Avenue,” he said, noting that the showing of the Toledo water colors and drawings represents the first time they’ve been on display. “He brings a little bit of softness to the building.”

The process of constructing the space didn’t take place overnight and it certainly required the approval of the city’s Landmarks Preservation Commission. Not only does the city protect the building itself; the restaurants, the lobby, the first 20 feet of interiors adjacent to the windows and the luminescent ceilings also sport landmark status, Mr. Werdiger said, noting one other protected feature while pointing at the building’s uniform exterior.

“These blinds are landmarked, too,” he said. “That’s not enforced, but, theoretically, you’re only allowed to have them down all the way or half-raised.”