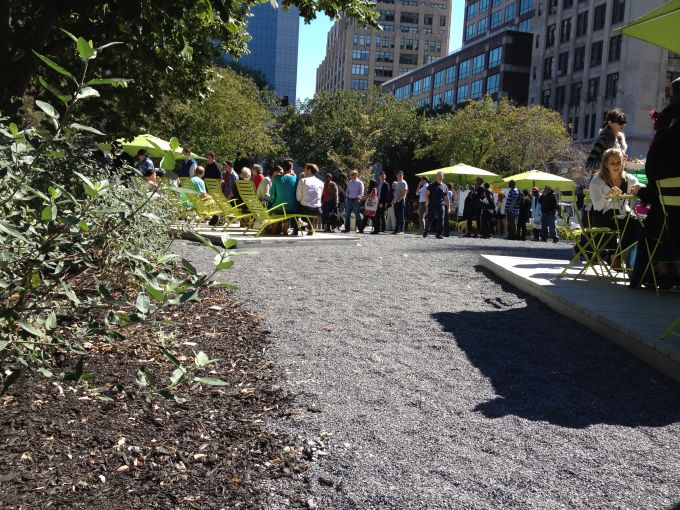 SEE ALSO: What Do Business Communities Do Now?

The two Port Authority-owned spots that have trees, seating and tables where a chain link fence used to surround an empty lot transformed under a combined partnership between the BID, the Port Authority, city agencies and the Trinity Real Estate company, said Ellen Baer, president of Hudson Square Connection.

“This is a neighborhood now,” Ms. Baer said as cars whizzed past the sites without overpowering the live music by Jason Green Duo or the long lines for free food by local restaurant EET. “This is no longer just the way to get to the Holland Tunnel.”

The BID ponied up $125,000 for new shrubbery, chaises and decks for the two sites designed by Mathews Nielsen Landscape Architects after inaugurating a similar open space area at Freeman Plaza West in 2013, Ms. Baer said. The Port Authority built new fencing, while Trinity Real Estate, the real estate division of Trinity Church, donated cherry trees that will flower in springtime and the city Parks Department planted nine new other trees. The new plots, which join a third that opened in May 2013, have created a place where people who work or live in the area can “sit down, relax and enjoy a cup of coffee or lunch with friends,” said Pat Foye, the Port Authority’s executive director.

“The first thing that comes to mind when thinking about the Holland Tunnel is unlikely to be open space and parkland, but, along with its critical role in the region’s transportation network and regional economy, the Holland Tunnel is quickly becoming known to the residents of Lower Manhattan for its public spaces,” said Mr. Foye in a prepared statement.

Local employees, many of whom lolled about on sculptures doubling as seating adjacent to Freeman Plaza East, echoed those sentiments. The neighborhood has embraced the parks despite their location in a “funny spot,” said Chris Mayo, who works for the maintenance company that services Trinity’s properties in the area.

“It’s great,” said Ms. Mayo. “You’d be surprised, people are out here all times of the day.”