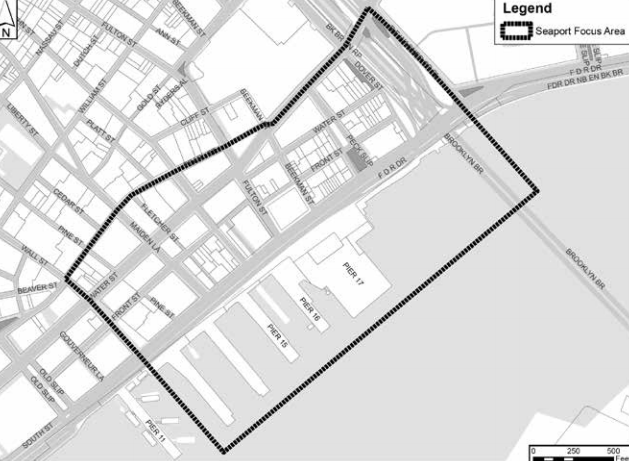 A committee of elected officials, nonprofits, local residents and representatives of the Howard Hughes Corporation presented the positive results of a feedback survey on its nine recommendations for the Dallas-based firm’s South Street Seaport projects to Community Board 1 last week.

After company officials agreed to take the task force’s recommendations under consideration ahead of submitting applications to the city Landmarks Preservation Commission and Department of City Planning this fall, the “Seaport Working Group” created a set of guidelines and received 2,367 comments from roughly 250 respondents that reflect generous approval for the group’s calls for aid to the South Street Seaport museum, creation of community spaces and contextual building, among other suggestions.

“The open house and online survey were important for two reasons: to get feedback on the work the Seaport Working Group has been doing the last few months, and to provide an essential opportunity for transparency and communication,” said Manhattan Borough President Gale Brewer in a prepared statement. “The public’s resounding 91% approval confirms that this process is producing substantial results – and that all of the guidelines and principles must play an important role in the development of the Seaport area.”

The only task force recommendation that generated any significant opposition turned out to be guideline number six, a plank asking for alternatives to Howard Hughes’ previous plans for a 50-story tower on the New Market site adjacent to its Pier 17 mall, encouraging sales of transferable development rights to “incentivize lower buildings and public spaces” and advocating for protection of east-to-west views of the Brooklyn Bridge and the historic ships in the port.

Seventy-one percent of the comments approved of the three-pronged guideline, but 26 percent opposed it. And, while the plank picked up support from 75 percent of Seaport residents, 86 percent of city residents and 86 percent of participants in the “other” category, only 29 percent of respondents from local workers, organizations and businesses, a group that may have included Howard Hughes employees, favored guideline six.

Representatives for Howard Hughes directed questions about the makeup of the respondent group to the city Economic Development Corporation, the owner of the property that Howard Hughes leases at Seaport and the administrator of the survey. EDC spokeswoman Kate Blumm disputed assumptions that the participants who opposed the anti-tower plank came from Howard Hughes.

“The ‘Bus./Org./Workers’ category is comprised of respondents who self-identified as representatives of local businesses or organizations, and other local workers,” Ms. Blumm wrote in an email statement. “Participants were not counted by employer, so assuming any particular employment status for respondents is speculative.”

CB 1 officials who also said they didn’t know the identities of the various respondent groups welcomed the survey’s findings.

“The takeaway is that the guidelines were very favorably received by the public,” said CB 1 Chairwoman Catherine McVay Hughes. “The opposition to the tall buildings was supported by more than three quarters of the community.”