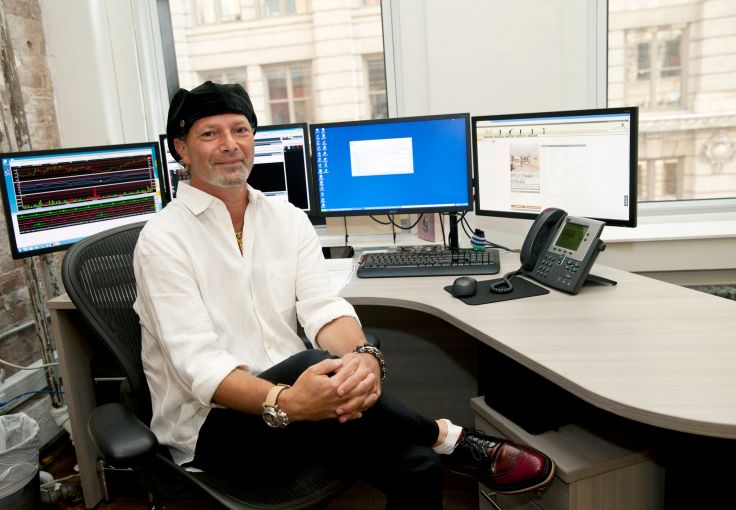 That moniker seems fitting for the 53-year-old co-founder and president of Prime Manhattan Residential, who looks more like an artist than a broker and whose real estate business really is a commercial-residential hybrid.

Mr. Dankner has a unique style. For an interview with Commercial Observer last week, he wore an off-white linen button-down shirt, black skinny jeans, eye-catching Prada red wingtips, a Graham Watches Chronofighter Pearl Harbor Limited Edition, four chunky bracelets including one made of hair from the tail of his girlfriend’s horse, a Bulgari Save the Children pinky ring, a 20-carat gold seahorses necklace with ruby cabochon and, of course, his ubiquitous hat.

Mr. Anapol tapped Mr. Dankner—a friend since they met in the Hamptons after graduating from college—to help open the residential arm in 2008.

“He’s able to explain the positive aspects of a particular property to show the buyer the real value, the inherent value, the future value, the development value of that property or project,” Mr. Anapol said.

Even though Mr. Dankner’s experience in the real estate market at the time was limited to investing in the market and being a principal at RDART, a company dealing in mergers, acquisitions and real estate investment, Mr. Anapol trusted Mr. Dankner could get up to speed quickly on the residential end because of his “acute business knowledge.”

Mr. Dankner is also a former Wall Street banker and he began his career in 1983 as a title trading assistant in E.F. Hutton’s futures department, with the early years spent trading oil and currencies.

His residential real estate deals range from $4 million to $10 million and his commercial property sales are in the $4 million to $80 million range. In an average year, Mr. Dankner said he sells real estate totaling more than $85 million. He has had his share of success, much of which he can’t get too specific about, he said, since it involves high-profile clients.

A number of years ago, he sold John Steinbeck’s 2,200-square-foot apartment at Tower East at 190 East 72nd Street on behalf of a Steinbeck family member for $1.75 million to someone who lived across the street. Mr. Dankner had acquired the listing through a young tech client he had represented years prior who knew the Steinbeck family.

“It was sort of a boring, square Upper East Side apartment where John Steinbeck lived. It was a complete gut,” Mr. Dankner said.

He is not a literary person, so at some level the importance of this deal “was wasted” on him.

“The first time I went in there they had every auction house in the country cataloguing everything,” Mr. Dankner said. I held ‘The Grapes of Wrath’—‘The,’” he said. “I held ‘The Pearl.’ I’m looking at these letters between him and Marilyn Monroe. I appreciated what it was but I’m much simpler than that.”

Mr. Dankner said he and the firm’s other two residential brokers focus on three areas: the buy side of sales in Manhattan, investment sales and private equity funding for early-stage residential development projects.

“I have a very unique skill set,” Mr. Dankner said “in that I have an uncanny way of understanding how to unlock value. There are a lot of things that look obvious but… are difficult. They have a lot of hair on them, whether it’s with rent-stabilization or IMD [Interim Multiple Dwelling] tenants or zoning challenges. But if you take the time to know how to manipulate and move, the path to take to get rid of the hair, there’s extraordinary value to unlock at several levels. This is the place where there are diamonds. And the diamond in the rough looks like a black rock. I look for those black rocks.”

He used that skill set in the purchase of the company’s commercial condo on the fourth floor at 11 West 20th Street, between Fifth Avenue and Avenue of the Americas. The partners bought the 2,400-square-foot space—which came with brick walls and its original 1890 wood floors—in large part because it carries with it the ability, under current zoning law, to be converted to residential.

Messrs. Dankner and Anapol paid about $1.96 million for the full-floor unit more than a year ago. Mr. Dankner pointed to the successful residential conversion of the floor below, which sold recently for $3.125 million, as an indicator of the profit they can make down the road.

Mr. Dankner’s work extends to the commercial side of the business, although he doesn’t call it that.

“I won’t say commercial; I’ll say investment sales. I work with a lot of developers, converters and investors at a variety of levels to buy and sell investment properties,” he said. “I’m probably one of the most active people in the townhouse market downtown—finding townhouses to renovate and sell.”

Mr. Dankner was the buyer’s broker on a $9.5 million townhouse Massy Knakal Realty Services sold at 37 West 10th Street in 2012.

“We found him to be very straightforward and honest to work with,” said Massey Knakal’s James Nelson, who co-listed the 6,950-square-foot townhouse between Fifth Avenue and Avenue of the Americas. “His buyer was very real and performed in short order.”

For instance, a commercial broker referred the owner of a loft unit at 219 East 67th Street to Mr. Dankner after the Corcoran Group hadn’t sold it. Mr. Dankner pulled it off the market, dropped the price and relisted it. It went into contract for $8.24 million within 10 days.

Architect West Chin of the eponymous firm likes to refer clients to Mr. Dankner because they both have a similar aesthetic and sensibility and believe in providing good service to clients, Mr. Chin said. Also, he said, “We have a similar understanding of what is good space. Robert knows how to maximize potential. He has a great way of promoting space in the right way. He knows how to highlight the points that are important.”

“People think we’re in a rock band when we walk into a bar,” the architect said.

In keeping with that rock and roll air, much of Mr. Dankner’s business is south of 30th Street.

And while he grew up in Great Neck, the father of three adult children lives in a co-op on 11th Street off of Fifth Avenue with his artist fiancée, Maude Davis. He also has a house in Southampton.

That downtown aesthetic doesn’t always initially bode well for the broker, but he nimbly turns it around.

“When I went uptown [to the listing at 219 East 67th Street], they thought I was too downtown,” said Mr. Dankner. “They were like, ‘Who’s this guy with the hat? Are you kidding me?’”

But he won them over, he noted, by telling them “it’s a beautiful Soho loft on the Upper East Side,” and they should target downtown families who want loft living and whose kids go to school uptown.

“I get to play chess every day,” Mr. Dankner said, seated at his desk with four computer screens. Two monitor the stock market, one features listings services provider On-Line Residential and the fourth is for his daily work.