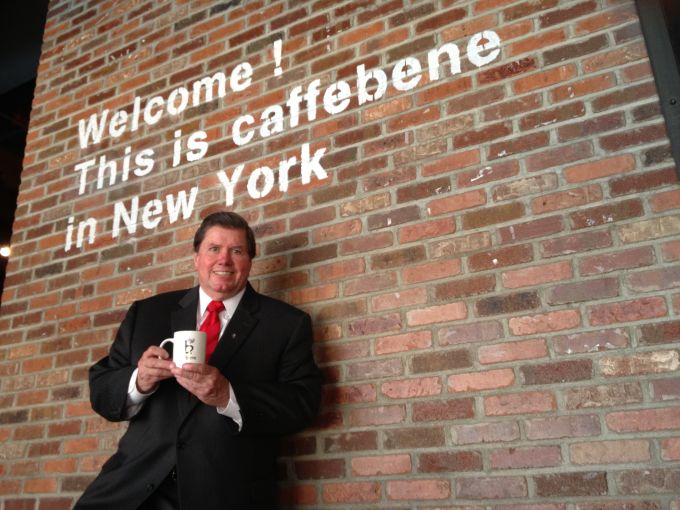 South Korea-based coffee chain Caffébene, which opened its first overseas store in Times Square in January 2012, will challenge Starbucks on its home turf with an aggressive expansion in the coming years, John Barry, the company’s director of franchise development, told Commercial Observer in an exclusive interview yesterday.

Mr. Barry spoke in the roomy 6,000-square foot flagship at Broadway and 49th Street where workers offered all visitors a free sample of tomato foccacia and patrons with laptops sipped coffee in an environment somehow worlds away from Times Square’s hustle and bustle and just a block away from the nearest Starbucks.

“I take my hat off to them,” Mr. Barry said of his company’s giant competitor. “It’s just we took a look at the industry, and, since they are number one, said, ‘What can we do better?’”

The franchise, which CEO Sun-Kwon Kim launched in 2008, grew by 300 stores per year between 2009 and 2011, Mr. Barry said, and it will be expanding from its current six New York City stores with 11 more in the next four months, as Commercial Observer previously reported. The company has plans for 4,000 U.S. locations and 10,000 worldwide by 2020, betting that millennials will opt for its more varied food options, customer-welcoming staff and comfy interiors.

“Fifty percent of the workforce will be millennials in 2020,” said Mr. Barry. “So we’re targeting them today as far as customers today and customers tomorrow.” He added that the company will introduce a customer loyalty program in the fall that “will literally shake the foundations of the coffee industry.”