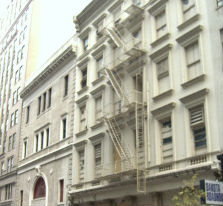 Soho Properties today is filing plans with the city to erect a condominium at 45 Park Place, next to the developer’s planned three-story museum devoted to Islam.

Designed by architect Michel Abboud of SOMA Architects, with Ismael Leyva Architects, the as-of-right glass and steel tower will rise 619 feet. Construction is slated to begin this year and the building will be completed in 2017, according to a press release from the developer.

“We are thrilled to contribute to the continued renaissance of Lower Manhattan and the new downtown skyline,” said Sharif El-Gamal, the chairman and CEO of Soho Properties, in a prepared statement. “We look forward to sharing our unique vision for an exquisite residential condominium property.”

Architect Jean Nouvel was tapped to design the neighboring museum “dedicated to exploring the faith of Islam and its arts and culture,” The New York Times previously reported, and public space.

No other details were provided by a spokesperson for the condo.

Park51 officially opened its doors as a cultural and community center at 45-51 Park Place in September 2011, a year after controversy ensued following announcement of plans for a 15-story Muslim institution two blocks from the World Trade Center.

As Commercial Observer previously reported, demolition plans were submitted to the Department of Buildings early last month, after the developer was spotted searching for temporary space for Park51.