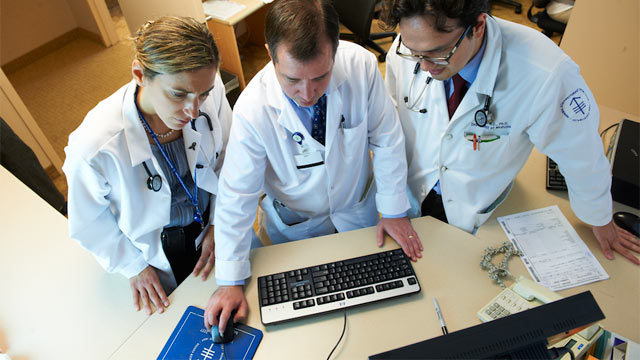 Several months ago, I unearthed a clock radio from an old box of belongings and set it up in my bathroom so I could rock out to some tunes as I showered before work.

At times, I was slightly amused by the segues of deejay banter, but the in-your-face commercials slinging everything from car insurance to pet food were less charming.

An ad about a cancer survivor who had achieved her dream of having children after receiving the best, most convenient care at a particular outpatient cancer treatment facility at first struck a chord, but by the fifth or sixth iteration, it admittedly grew tiresome, and I retired that particular station altogether.

“I hear advertisements on radio and TV for every city hospital,” said one leading commercial real estate executive who focuses on the health care industry. “Hospitals never before used social media, television, radio and newspapers anywhere near the extent that they do now.”

The increased prevalence of such ads is no coincidence, as hospitals and other health care groups compete for market share, medical professionals and patients. All the while, health care provider costs are increasing, as the Feds grapple with skyrocketing health care costs and, due to the Affordable Care Act, have substantially decreased Medicaid and Medicare reimbursements to hospitals.

As a result, hospitals are pushing to become more specialized and efficient, which is evident as new, and often state-of-the-art, ambulatory care and outpatient clinics spring up across New York City. The private practice all but disappears as individual doctors bogged down by new paperwork join group practices. And hospital groups scramble for the millions of people now required to be insured under the ACA.

The city is now home to one of the largest not-for-profit health systems in the country, most recently exemplified by the Mount Sinai and Continuum merger, which will combine Mount Sinai’s academic specializations with Continuum’s community hospitals. Such mergers will expand the capabilities and specializations necessary to survive in an increasingly competitive market.

“It’s the tip of the iceberg,” said Michael Berne, who as managing director heads Lee & Associates’ senior housing arm. “I think we are going to see more and more mergers and consolidations, and it wouldn’t surprise me if hospitals on Long Island and northern New Jersey start to merge with those in Manhattan.”

In addition, the number of seniors older than 65 is expected to at least double over the next two decades, as developers once far removed from the health care sector consider the value in this growing segment of the population, which will turn a billion-dollar industry into a trillion-dollar one.

“Owners of real estate in every major city in the country that historically have only been in the industrial and commercial retail areas are seriously considering senior housing and ambulatory, medical and surgery centers,” said Mr. Berne, who in the last nine months was approached by four major national players looking to move into the space.

With Medicare and Medicaid constrained, efficiency is necessary. Though mergers will become more commonplace, ambulatory and outpatient centers will give hospital groups the “economies of scope” that a merger completed simply to increase scale will not achieve, said Cushman & Wakefield Executive Managing Director Scott Mason, who leads that firm’s health care group.

Mount Sinai Hospital this month inked a 14,500-square-foot deal to open a dialysis center in East Harlem on the fourth floor of 520 East 117th Street at East River Plaza, a result of medical procedures once conducted on hospital beds now being considered walk-in procedures.

Segmented, dark office buildings are a thing of the past as patients demand faster service and more inviting spaces and as what Mr. Mason calls a “retail mindset” overtakes the industry. For example, CVS Caremark, a leader in the walk-in clinic retail space, is one of the fastest-growing components in health care right now, he said.

“If I need a flu shot, would I rather go through the trouble to get an appointment that’s three weeks away or do it when I’m picking up my gumdrops?” he said. “It’s a no-brainer.”

Across the city, major hospital groups over the course of the last year and a half have launched initiatives that will increase specialization and scale in one form or another. Memorial Sloan-Kettering, Mount Sinai, Montefiore Hospital and Inventa Health are among the dozens of hospitals and medical companies with new initiatives in the pipeline. William Macklowe is one developer keen to the new developments as he transforms 156 William Street into a medical facility.

New York-Presbyterian Hospital is expanding and taking over New York Downtown Hospital at 1283 York Avenue, where it is building a new ambulatory care center; Memorial Sloan Kettering Cancer Center and the City University of New York are constructing two new state-of-the-art science and medical facilities on the Upper East Side, including an up to 750,000-square-foot cancer care facility and a more than 336,000-square-foot science and health professions building; and Montefiore Medical Center and Simone Development are creating a new 280,000-square-foot building at Hutchinson Metro Center.

“You have to do things differently in New York City, because you simply don’t have big areas of undeveloped space,” said Jeffrey Cooper, the Savills U.S. chairman and executive managing director, who spearheaded that firm’s real estate practice.

Leasing space in office buildings for specialized treatment centers becomes a go-to option when there is a lack of space, and that part of the equation is picking up as well.

“While a lot of these hospitals find a need to locate near patients and are spreading away from campuses into the outer boroughs or Manhattan, others are leasing space in office buildings near existing campuses,” Mr. Cooper said.

“There are too many hospitals in the city, and as a result many have empty beds,” he said, noting that two-bed rooms are becoming single-bed rooms, creating a more private, comfortable experience.

The health care industry occupies a rapidly evolving and complicated terrain. Newcomers looking to enter the space should proceed with caution. There will be winners and losers, with the most prominent example of the latter perhaps being the 161-year-old St. Vincent’s Hospital, which announced its closure in Greenwich Village in 2010 and made way for a controversial luxury condo conversion. Hospitals in the boroughs are still struggling to stay afloat, and Long Island College Hospital in Brooklyn is just one on the verge of well-publicized and fraught collapse. And smaller hospitals will find it difficult to survive.

But large hospitals will struggle too as health care costs become unsustainable and higher-end hospitals offering the most expensive services become especially vulnerable. The competitive edge they seek with an array of new offerings is perhaps a saving grace, and though it may cloud an already complicated industry as the changes pan out, in the end, the experts believe the consumer will be better for it.