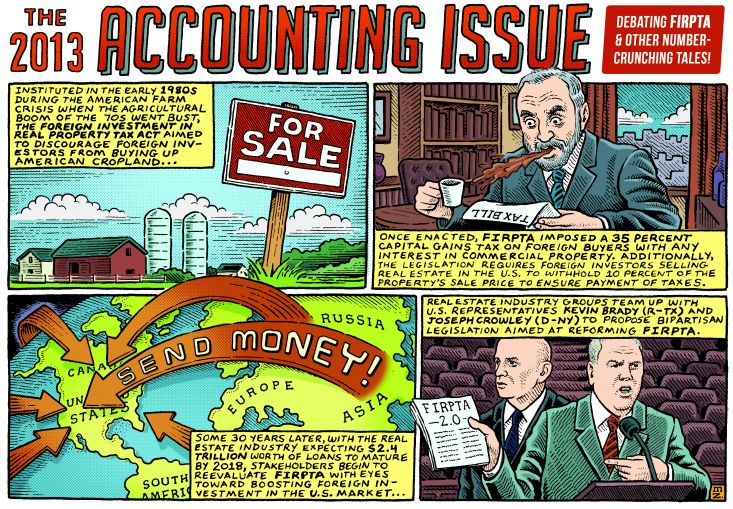 In the early 1980s, with overseas investors hovering over American farmland and commercial properties, Congress set in motion the Foreign Investment in Real Property Tax Act in an attempt to limit foreign acquisition of U.S. real estate.

Over 30 years later, FIRPTA, as it is known, is under the spotlight again, with the nation’s real estate industry eager to reform the legislation that requires of foreign investors a 10 percent withholding on the sale price of a property to ensure payment of taxes owed. Reforming the law, which also imposes a 35 percent capital gains tax on some property sales, it is argued, will further open up the U.S. real estate market to foreign investors. Real estate’s most prominent tax professionals have their eye keenly focused on the arguments as they continue to work on behalf of clients to both better understand the implications of FIRPTA and devise creative ways to limit its impact on returns.

“The feeling is that FIRPTA cuts down on a community of enthusiastic buyers into U.S. real estate,” said Larry Varellas, managing partner of the tax group at Deloitte. “The market is smaller than it would be if FIRPTA was reformed.”

Both industry groups and members of Congress have moved to remove the restrictions in the U.S. tax code that, in their minds, discourages foreign investment in commercial real estate. In August, Kevin Brady (R-Texas) and Joseph Crowley (D-N.Y.) announced bipartisan legislation to reform FIRPTA, backed by the Invest in America Coalition, a lobby with prominent members such as the Real Estate Board of New York and Brookfield.

The proposed reform would increase the ownership cap that determines tax payments on particular transactions. Under current stipulations, FIRPTA requires investors pay tax if they sell shares in a real estate investment trust in which they own 5 percent or more. The proposal would increase that cap to 10 percent.

The proposal does not include changes to other components of FIRPTA, such as the taxes levied on foreign investors who sell a majority share of a property. A vote has not yet been scheduled on this proposal, but similar legislation proposed in 2010 passed through the House of Representatives before falling by the wayside in the Senate.

“Congress singles out no other industry with negative tax treatment as we do in the real estate industry,” Mr. Crowley said during a conference call announcing the legislation.

Indeed, foreign investors are not taxed in other asset classes, such as stocks and bonds, as they are in real estate.

“Foreigners are generally only taxed on income earned by a U.S. trade or business but not capital gains,” said Tim Larson, partner in charge of the tax department at Marcum LLP.

“On a comparative basis, if a foreign party owns stock in Google and sells it at a gain, that gain is not taxed in the U.S.,” Mr. Varellas noted.

Until the day when the tax code is reformed to become more hospitable to foreign buyers, tax professionals are required to work in overdrive to offer advice to clients on innovative deal structures and ways to limit the amount of tax withholdings.

With gains on stock free from capital gains tax restrictions, one of the most prominent ways for foreigners to make real estate investments is to do so through an REIT—with the caveat that those REITs be domestically controlled and predominantly used by U.S. investors.

“I think you’ll see that structure more and more so they can get their money out without paying a tax,” said Mark Bosswick, co-managing partner of Berdon LLP.

The REIT option is not without its complications and drawbacks. According to Mr. Varellas, in the case of private REITs, the sale of real estate within that REIT and the subsequent distributions to shareholders attributable to that sale are taxable under current rules. “That’s probably the most severe example,” he said. “There is momentum to get that rule changed.