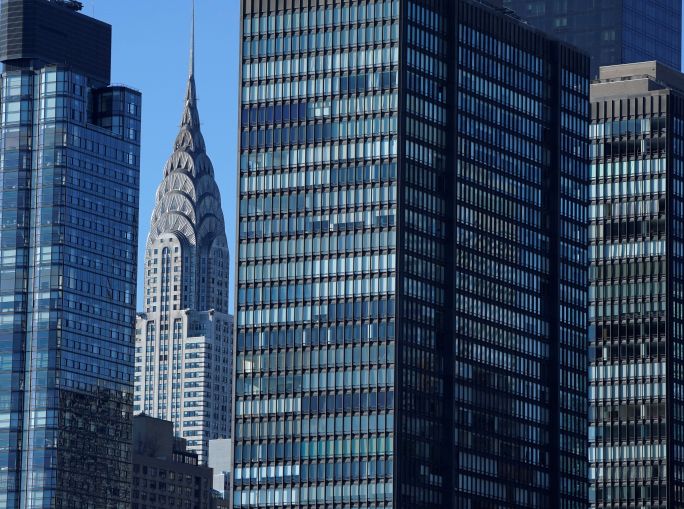 The Chrysler Building, an Art Deco skyscraper on the East Side of Manhattan in New York City is seen from Roosevelt Island on December 4, 2022. AFP via Getty Images

Office attendance in New York City — and other major cities across the U.S. — stagnated throughout November and parts of December, data shows. But some think the new year will bring higher numbers.

Office workers came surging back to Manhattan immediately following Labor Day, bringing the city’s office towers to 49 percent occupancy, but the numbers have steadily dropped since then.

Office attendance nationwide averaged around 39.8 percent of what it was in November 2019, according to the latest numbers in the Placer.ai Nationwide Office Building Index released this week.

Things aren’t looking much better for December. Kastle Systems showed New York City’s office attendance numbers have basically stagnated to just under 50 percent in the final month  of the year.

For the week of Dec. 5 to Dec. 9, New York City’s office buildings recorded 48.4 percent of pre-pandemic averages, a 1.8 percent decline compared to the previous week, according to Kastle Systems’ Back to Work Barometer.

“The office visit recovery has clearly plateaued, indicating the ongoing impact of hybrid work and the lasting shift in workplace behaviors,” Placer.ai’s Ethan Chernofsky told Commercial Observer. “Yet, it’s also clear that a recovery has taken place and the office remains a critical component of work culture for many, if not most, businesses.”

But Chernofsky and Kastle Systems’ Mark Ein said there’s potential for the future of office attendance.

If the current economic conditions improve, there’s a chance that could “lead to even stronger office visit metrics,” Chernofsky said. Ein said without a booming economy more employers might become less gun shy about calling for stricter returns.

“For a very long time, employers had wanted to get their team back in the office, and the constraint was a tight labor market and a roaring economy,” Ein said, adding that many companies might be more strict in the coming year to justify the costs behind signing new leases. “Both those things have changed.”

Ein added that there’s traditionally a surge in attendance after New Year’s Day, and that momentum might keep office workers returning weekly.

“What we think is going to happen is that as people start to come back to the office more often, there’s going to come back on the [less highly trafficked days],” Ein said. “I think it will be incremental, but once you’re in the habit of being in the office as opposed to being at home, there’s a certain amount of momentum to have that be the place where you work.”