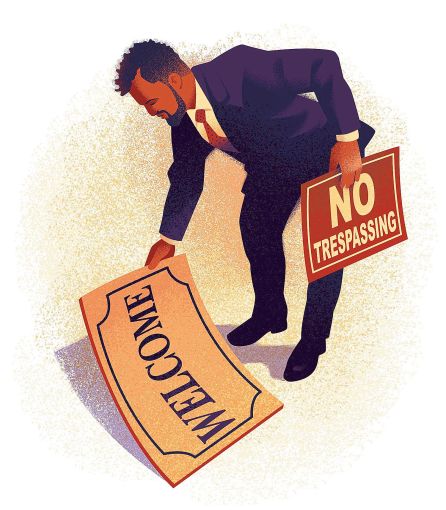 A man holds out a welcome mat. Illustration: Kevin Fales

New year, new mayor. And, in a surprise twist, 2021 saw a new governor when Kathy Hochul took the reins of New York state from Andrew Cuomo after he resigned in disgrace. The dual transitions of power led to a shift in some of the appointed officials charged with leading New York City’s committees, commissions and public corporations — with many of them coming from real estate backgrounds.

Real estate and politics have always been intertwined in the Big Apple, but debates over affordable housing, rent stabilization and the city’s built environment reached a fever pitch during the pandemic. Those debates have yet to be settled, but with Hochul and Adams’ new appointments, the real estate industry might get even more of a say.

In New York City, Adams appointed Christina Smyth of her eponymous law firm Smyth Law PC as an owner’s representative to the Rent Guidelines Board in March. Her appointment came before the board took a preliminary vote in favor of an increase in rent between 2 and 4 percent for one-year leases in the city’s approximately 1 million rent-stabilized apartments and between 4 and 6 percent for two-year leases, moves that failed to satisfy tenant or landlord advocates — despite being the biggest hike in a decade for one-year leases.

Smyth, alongside public member Arpit Gupta, an assistant professor of finance at New York University’s Stern School of Business, are expected to be friendly to landlords. Ariel Property Advisors cited the appointments as positive news for property owners in the firm’s first-quarter multifamily report.

“Property owners are hopeful that the new members will bolster their representation on the board,” the report read. “In June, the Rent Guidelines Board will vote on the annual rent increase allowed for rent-
stabilized units. … The vote will have a strong impact on the multifamily market as rent-stabilized assets have become more attractive to buyers.”

Landlord organizations argued for rent increases in rent-stabilized apartments before the RGB on April 26, citing the rising cost of renovations to buildings. Tenant advocates said residents would be unable to pay increased rents due to the pandemic, and that occupants of poorly maintained and dangerous buildings shouldn’t have to.

The RGB did not respond to requests for comment, but at that April 26 meeting Smyth noted that the Housing Stability and Tenant Protection Act of 2019 limits the rent increases a landlord can put in place after renovating an individual apartment to $15,000 over 15 years. She argued that the caps prevent landlords from getting a return on that investment and disincentivizes upgrading apartments. Previously, a landlord could spend any amount of cash on renovations and increase rent by up to 20 percent when an apartment was vacated — potentially allowing them to deregulate the living space — according to the city.

Smyth also seemed to say that the Community Service Society of New York (CSS) — a nonprofit that provides grants, education, access to health insurance and assistance in registering for state benefits — had too big of a budget. CSS, which testified that rent-
stabilized tenants need lower rents, has an annual budget of about $253 million, which goes toward its program services like enrolling people in the Affordable Care Act, said Samuel Stein, CSS’ housing policy analyst.

“I think if owners and tenant organizations could share in the economic burden that is affordable housing we’d have an easier time every year at the RGB,” Smyth said. “I’m certain that my clients don’t look at their tax returns and see $253 million.”

Adams also made some key appointments to the Economic Development Corporation — naming Margaret Anadu as chair to the public-private partnership’s board and Andrew Kimball as president and CEO. Kimball’s appointment followed reports that the mayor’s previous top pick lobbied city officials for private property deals without registering as a lobbyist, and came five days after the organization’s previous leader, Rachel Loeb, departed. But the hullabaloo that preceded his appointment didn’t have an impact on his decision to work at the EDC, Kimball told Commercial Observer.

“The opportunity to really embrace partnership with the private sector and drive development in all five boroughs is both a unique opportunity and a tremendous responsibility,” Kimball said. “We have a fantastic team of professionals here at the EDC that [make it] exciting to come to work every day.”

Kimball joins the EDC from a background in both public and private real estate — he led leasing at Industry City, the 16-building Brooklyn campus, and worked as president and CEO of Brooklyn Navy Yard Development Corporation. He said he was proud of his work at both organizations but  couldn’t wait to work with Adams on re-energizing the city’s economy. Kimball also serves as a board member of the Brooklyn Chamber of Commerce, which relocated to Industry City in July.

Anadu comes from a private-sector background as Goldman Sachs’ former global head of sustainability, but got started in the Adams administration as one of five leaders of the Economic and Workforce Development Committee on the mayor’s transition team in December 2021. She plans to stay involved in the private sector as a real estate investor, she told CO in an email, but declined to be interviewed further.

“I am energized by the opportunity to volunteer my time and effort to build a stronger, more equitable and more resilient future for this great city that we all love,” Anadu said in a statement when she was appointed in April.

The two are charged with spurring economic development in the EDC’s 66 million-square-foot property portfolio, and Kimball plans to examine the cost of the EDC-funded city ferry service — which has been criticized for costing the city more money than it brings in and serving mostly white, affluent riders. But Kimball believes the ferries are a tremendous improvement to New York City’s public transport system — serving millions of residents each year before the pandemic — and said the EDC was working on the network’s newest iteration.

Kimball also plans to focus on developing the offshore wind industry in the city, starting with the South Brooklyn Marine Terminal and a 33-acre servicing port for the terminal on Staten Island, which the EDC is currently soliciting requests for proposals on.

Law, who chairs TritecReal Estate’s affordable housing team, co-chaired the Long Island Regional Economic Development Council for nearly a decade, where he focused on increasing workforce housing. He will be responsible for the public benefit corporation’s mission promoting a growing economy and creating new jobs for residents.

One project Law will have a hand in is the development of 418 11th Avenue, dubbed “Site K” — a lot Don Peebles’ firm wants to develop into a 1,500-foot-tall tower. Unfortunately for Peebles, the state rescinded its request for proposals for the site in December to solicit more feedback from residents, and amid concerns the proposed tower would not include housing. A representative for Law said he couldn’t comment on his new role before he was confirmed to the UDC — leaving questions about the fate of Site K unanswered.