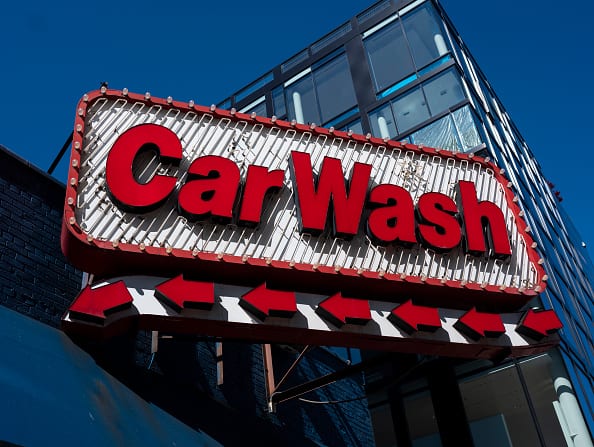 Most, if not all, of the financial responsibilities for a car wash fall on operators, not property owners. That makes the real estate particularly sought after by investors. Robert Nickelsberg/Getty Images

Real estate investors looking for a safe place to park money coming out of COVID might consider the humble car wash. The sudsy byproduct of the automotive age has, in just a few short years, become an unusually durable commercial real estate asset.

It is largely immune to the encroachment of the internet — unlike so much brick-and-mortar retail — and its leases run to the long side: 15 to 20 years usually, with rent coverage ratios at least two times earnings before interest, debt, depreciation, taxes and amortization (EBITDA).

These fundamentals, too, appear to be recession-proof, even when it comes to a downturn spawned largely by a pandemic that kept Americans off the road in record numbers. What’s more, the fee-simple, triple-net leases that have become increasingly standard for car washes means little risk for landlords and lots of benefits, including through their taxes.

“I’m selling a Mister Car Wash now, which has a little bit of term burned off, but there are absolutely zero landlord responsibilities on it,” David Wirgler, an associate director in the Newport Beach, Calif., office of investment sales firm Stan Johnson Company, said in early April. “It’s not uncommon to come across that.”

Revenue in the industry, meanwhile, increased at an annualized 0.6 percent from 2015 to 2020. Revenue is projected to rise 3.4 percent annually, to some $12.9 billion, through 2025. By the same year, the number of car washes is expected to climb to more than 56,000, according to IBISWorld.

The car wash industry’s growth has long traveled alongside America’s love affair with the automobile. The modern industry dates from just after World War II, when the first fully mechanized car washes began popping up around Detroit, then the world’s auto-producing hub, according to the International Carwash Association (ICA), a trade group. These replaced the automobile “laundries” developed toward the dawn of the automotive age 50 years before, which mixed human muscle with machines.

By the 1950s, car wash chains were on the rise, and so were the number of services they offered. Heavily automated and increasingly fast, car washes by the 1970s were a major feature of the American landscape, often tucked in with gas or service stations.

Most operators adopted either an in-bay model, where motorists drove their cars in and waited while mechanized brushes washed it, or a conveyor model, where belts on the ground pulled the car through. In both models, car wash employees do the detailing, including vacuuming the interior.

These two models, with an increasing number billing themselves as “express,” predominate. About three-fourths of U.S. car washes were likely either in-bay or conveyor in 2020, according to an ICA analysis. The rest rely simply on people doing all of the work.

The investment evolution in car washes has been much shorter than this physical one. At the start of the past decade, small, independently owned chains and individual sites dominated the industry. Over the last few years, though, private equity money has poured in and the ownership structure for car washes has evolved into a readily scalable — and salable — pattern identical to one often found behind dollar stores, fast-food restaurants, big-box outlets and other free-standing, single-tenant properties.

Private equity investment in car washes hit a decade-long high of $112.6 million in 2017 through 21 deals, and was $110 million in 2018 through 22 deals, according to research portal PitchBook.

As more institutional money settled on car washes, fee-simple, triple-net leases became the preferred ownership structure and a big reason for the industry’s durability as an investment. In a fee-simple, triple-net lease, an owner has total ownership with the tenant responsible for all costs, including maintenance. Owners can also claim depreciation to reduce taxable income — often accelerated depreciation, given the specialized nature of car washes. Rent increases are often baked into the deal, too.

“If you’re talking to a high-net-worth individual who is looking for a long-term, stabilized asset that they’re going to basically mailbox money, the car wash lease structure will kind of check all of those boxes,” Wirgler said.

Other car washes might operate under a triple-net ground lease — no fee-simple — which provides many of the same investment benefits, except the depreciation. (Ground leases in general have, in recent years, undergone a kind of revolutionary change from an investor’s point of view.)

Given also that a newly built car wash is likely to remain a car wash — it can’t be much else unless it’s stripped or razed — and that Americans will keep driving, come what may, the leases tend toward that long end. It’s no surprise, then, that the car wash ownership arrangement has won even more fans amid the uncertainty that the pandemic wrought in a range of other asset classes, including hospitality, malls, and office property.

“They did very well during COVID,” Karen Hutton, chief executive of Hutton, a Chattanooga, Tenn.-based real estate investment and development company, said during a Commercial Observer forum in early March. Hutton said she will have invested in 40 car washes by the end of 2021, or within 18 months of first investing in the sector. “They’re growing like wildfire.”

The pandemic did ding car washes. A large number of states deemed the businesses nonessential, so many shuttered for much of 2020. Stay-at-home advisories, too, meant far fewer drivers on the road, denting demand. Revenue fell by an estimated 13.6 percent during the year, according to IBISWorld. Private equity investment, too, dropped sharply, to $25 million through 25 deals.

Still, revenue and other measures of the industry’s health are expected to rebound, as municipalities and states fully reopen and the U.S. economy continues to recover. More people will be driving again than before the pandemic, including to reopened workplaces, and gas prices have stayed generally low. Most drivers, too, appear to prefer a car wash to washing their own rides, according to a 2019 ICA survey.

Plus, whatever the push for a greener planet, Americans love their cars: The number of motor vehicle registrations nationally increased last decade by 20 million, to 273 million, and it’s expected to reach 296 million in 2025, according to IBISWorld.

Even that push for a greener planet, too, includes cars that will need to be cleaned and washed. President Joseph Biden’s proposed $2.3 trillion infrastructure plan includes $174 billion to promote the production and use of electric vehicles. And General Motors has said it plans to produce only electric vehicles by 2030.

The private equity investment also ensures an increase in the number of car washes. Funds going in want a profitable exit from their investment, and one way to do that is by increasing the number of locations.

“When you have private equity going into a space, they obviously want to increase their cash flow, so that when they go to sell, they’re selling on a larger EBITDA,” said David Annett, an associate director in Stan Johnson Company’s Tulsa, Okla., office.

Favoring growth, too, is the fact that no one chain currently dominates the industry. The largest — Tucson, Ariz.-based Mister Car Wash Holdings, which private equity firm Leonard Green & Partners acquired in 2019 in a deal worth $380 million — drew 4.4 percent of the industry revenue in 2020, according to IBISWorld. The next three biggest — Autobell, Mike’s Carwash and Wash Depot Holdings — together accounted for under 2 percent.

At the same time, more car wash chains are embracing subscription models to get rid of one of the few risks in the business: a lack of brand loyalty. The subscriptions allow customers not only to book washes online and via apps, as well as to earn freebies, they also allow investors to better gauge future cash flow. That makes car washes even more sure as a bet coming out of COVID.

The growth, though, could end up being the industry’s biggest enemy. That lack of brand loyalty won’t be overcome quickly, and, in the meantime, too many competitors opening up in one area could eat up marketshare. The 2019 ICA survey found that three-fourths of consumers picked their regular cash wash because it’s one they happened to have driven past.

“A lot of these are driven by the direction of traffic,” Wirgler said. “You don’t really care if it’s pink bubbles or blue bubbles hitting your car.”