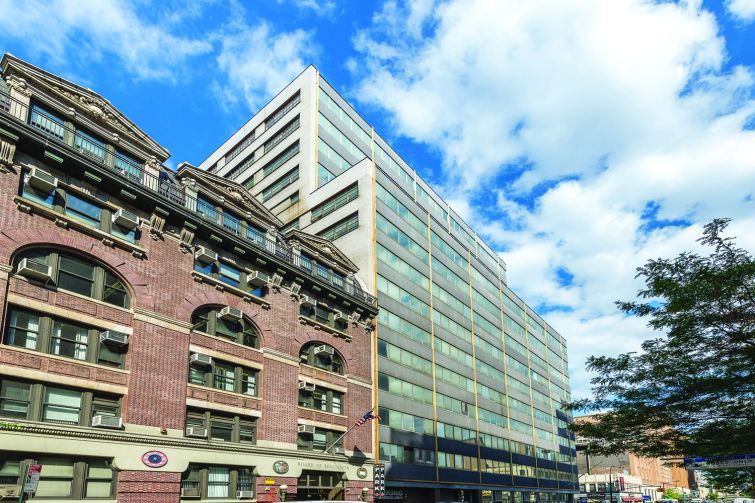 Brooklyn Housing Court on Livingston Street in Downtown Brooklyn is too cramped to hold trials safely during the pandemic. So the state reopened the court for in-person appearances last week but relocated a trial to a larger courtroom nearby. Image: CoStar Group

Most tenant attorneys, and even some landlord lawyers, believe that it would be unsafe to start in-person eviction trials until the pandemic is under control. Meanwhile, many lawyers on the landlord side of the business believe that their clients have waited long enough to pursue evictions and other housing court matters, and that the risk of spreading the virus can be properly mitigated with masks and social distancing.

The debate runs up against issues of due process and raises questions about whether the archaic city and state court systems can operate properly over Zoom or Skype. Holding proceedings over video chat also makes it difficult for low-income or elderly tenants, who may not have access to technology that enables them to participate in their own cases.

“There have been instances outside of New York where people have been evicted because they ran out of minutes on their phone, or they had a tech issue,” said Justin La Mort, a housing attorney at nonprofit Mobilization for Justice. “A lot of people facing eviction are less tech savvy, and it’s a higher percentage of the elderly and of non-English speakers.”

Brooklyn Housing Court reopened last Monday for one in-person trial—a case where a tenant is suing her landlord. The housing courtroom, which is located inside the civil court building at 141 Livingston Street in Downtown Brooklyn, is so small that the trial was relocated to a bigger room in Brooklyn Supreme Court, at 320 Jay Street, where attorneys and litigants could social distance properly. Everyone entering the building must wear masks and have their temperature taken. Hand-sanitizer dispensers and acrylic barriers have also been installed in the building’s ceremonial courtroom, where in-person appearances are taking place.

The state court system has not set reopening dates yet for non-emergency, in-person appearances at the housing courts in Manhattan, Queens or the Bronx. Staten Island Housing Court is set to reopen for regular trials on Aug. 10.

Evictions and related legal proceedings are on pause through Aug. 5, according to guidance issued by the state court system on July 8. When the current eviction case moratorium expires, Gov. Andrew Cuomo could extend it. Alternatively, Chief Administrative Judge Lawrence Marks, who oversees the entire state court system, could issue a new rule allowing eviction cases to proceed, or continue to push back the deadline for restarting cases.

The housing courts have been hosting settlement conferences and other kinds of hearings remotely since closing their doors to in-person hearings in mid-March. Tenants who don’t have access to video chat technology are able to come to the court buildings to use Skype, but otherwise have few options unless a lawyer can arrange video conferencing for them.

Attorneys who represent tenants argue that there isn’t a compelling reason to resume in-person appearances in housing court if the courts have been operating remotely.

“We’ve been working this whole time, so it doesn’t seem necessary to leverage people’s health and safety while we’re still very much in the middle of the health crisis,” said Claire Gavin, a civil vice president for the Legal Aid chapter of the Association of Legal Aid Attorneys. “If your stated goal is to clear up some of these cases, and the court is scheduling these conferences but we haven’t gotten through all of them yet … To force people back into court for trials right now, I don’t think it’s safe. The court has been functioning and can continue to function without that.”

Other public defenders raised questions about whether the state court system had conducted a detailed health and safety assessment or upgraded the ventilation in the city court buildings, most of which are at least 50 years old. La Mort noted that attorneys “have been lobbying” the Department of Citywide Administrative Services and the city Department of Health “to say whether the court buildings are safe. If the mayor wanted them to, he could have them look at it, and they could have them decide whether it’s safe for court.”

“We may never have the opportunity for a risk-free environment, and the denial of justice for both landlords and tenants has gone on too long, especially given the backlog of cases even before the pandemic,” said Jeffrey Goldman, a managing partner and head of the litigation department at Belkin, Burden and Goldman. “The tenant bar is effectively saying we don’t want to go to court until such time that there is 100 percent certainty that there won’t be a risk of getting coronavirus. It’s not fair to owners who aren’t getting rent, it’s not fair to criminals who are being held in custody, and it’s not fair to tenants who have claims against their landlords.”

He added, “Letting me file a holdover case for a tenant whose lease has expired and who has not paid rent but not telling me when I can get to court and when the judge will hear my case is [an] open [court] in theory but not in practice. I don’t have a court date, my client doesn’t know when they will get rent again. It’s really, really problematic.”

On the issue of ventilation and making the court buildings safe, Lucian Chalfen, a spokesman for the state Office of Court Administration (OCA), said, “As we continue our deliberate, measured and carefully monitored return to in-person appearances in all New York City Courthouses, the health and safety of our judges, non-judicial personnel, court officers, attorneys and litigants is paramount.

We have done walk-throughs of all court facilities with our epidemiologist, and while the responsibility for the maintenance of the buildings rests with the City, they have installed MERV-14 air filters that are state of the art.”

As many as a quarter of renters in New York City have not paid rent during the pandemic, according to data from the Community Housing Improvement Program (CHIP), a landlord group. In July, the share of renters who couldn’t pay declined to 17 percent, CHIP’s latest survey found. However, at least 15 percent of renters remain more than one month behind on rent. Public defenders are predicting a flood of new eviction cases once the state signals that eviction proceedings can resume.

Judge Anthony Cannataro, who serves as the administrative judge of New York City’s civil court system, told landlord and tenant attorneys in an email in mid-July that the civil courts needed to resume in-person trials to clear a backlog of 200,000 cases, according to Law360.

“Unfortunately, despite my best efforts, it has been disheartening to witness the lack of serious interest or widespread participation among the bar in self-initiated out-of-court negotiation or even court-initiated virtual case conferencing,” the judge wrote. “We find ourselves …  returning to more traditional, and admittedly less desirable, forms of compulsory dispute resolution like in-person trials of long-overdue matters.”

Chief Judge Janet DiFiore has said that if people involved in a case don’t feel comfortable attending court in person, they can request a virtual trial. However, nonprofit tenant attorneys feel that it may not be possible to host a housing court trial fairly over video chat.

“There are questions about how to conduct something as complex as a trial, where people need to be able to cross-examine and raise objections of someone giving testimony, when they aren’t in the physical presence of the witness,” said Marika Dias, the managing director of the Safety Net project at the Urban Justice Center. “With the technology we’ve seen and the setups we’ve seen, I don’t feel comfortable saying [virtual housing trials] are possible now.”

She added that the courts haven’t solved issues like making video court proceedings accessible to the public and providing interpreters for non-English speakers during remote hearings.

And there are issues that extend beyond technological access. Studies have found that both judges and juries view defendants as less credible if they testify over video rather than in person. A 2015 report funded by the Department of Justice also determined that some video-conferencing software, by eliminating certain vocal frequencies, “removes critical emotional cues that can be used by judicial officers to determine a defendant’s remorse and character.”

La Mort pointed out that something as simple as testifying during a trial is complicated if it’s done over the phone or video.

“How do you know someone doesn’t have notes that they’re reading off of, that someone isn’t feeding them answers?” he asked. “You can’t read off a script when you’re on a trial. You have to speak from memory.”

Despite the risks, the court system has marched on, particularly on the criminal side. Criminal courthouses across New York City reopened for in-person appearances and trials in late July, triggering federal lawsuits from several public defender groups and from the state court officers’ union. On July 28, a federal judge denied a request from the public defender organizations to halt in-person, non-emergency court proceedings.

The legal services groups, which include the Legal Aid Society, the Bronx Defenders and the Brooklyn Defender Services, argued in a statement that the state Office of Court Administration’s plan to reopen the courts “forces our clients to choose between their health and safety and their freedom, and violates the Americans with Disabilities Act in doing so. Moreover, the cases OCA seeks to schedule are not urgent: The people who are forced to come to court are people already at liberty. They were, like the rest of us, trying to work, care for our families, and stay safe. Their cases have not been indicted. There is no grand jury action. There is no reason to force anyone to pile onto public transit and into courtrooms for cases that are going to be adjourned, when the same result can be achieved over a virtual hearing.”

Although the suit is primarily concerned with criminal court, it would also affect cases in the civil and housing courts. The two main public defender unions—the Legal Services Staff Association (LSSA) and Association of Legal Aid Attorneys (ALAA)—have also publicly stated that their members will not appear in court until they believe it is safe to do so. The two unions represent 2,000 civil and criminal lawyers at Legal Aid, Mobilization for Justice, Legal Services NYC, Bronx Defenders and several other nonprofit legal organizations.

Jared Trujillo, the president of the ALAA, told the New York Daily News last month that three dozen of his members had contracted COVID-19.

Private tenant attorneys have also sided with the public defenders in opposing in-person trials. “Resumption of eviction proceedings compels parties to make the irreconcilable and, arguably, immoral choice between preserving either their health and safety or their due process rights and homes,” a group of 20 private practice tenant lawyers wrote in a letter last month.

Public defenders, meanwhile, are quick to emphasize that their clients, who are among New York City’s most vulnerable, are the most likely to suffer if there were another coronavirus outbreak in the city courthouses.

“One of the things that’s important to highlight is that Black and brown people are over-represented in housing court eviction cases, and those are the same communities that have been hardest hit by COVID-19,” said Dias. “And when we’re evaluating these questions of risk, we have to ask who are the most vulnerable people in these cases. It might not be the landlord attorney or the landlord, it might be the tenant living in an overcrowded setting where rates of COVID transmission have been high.”