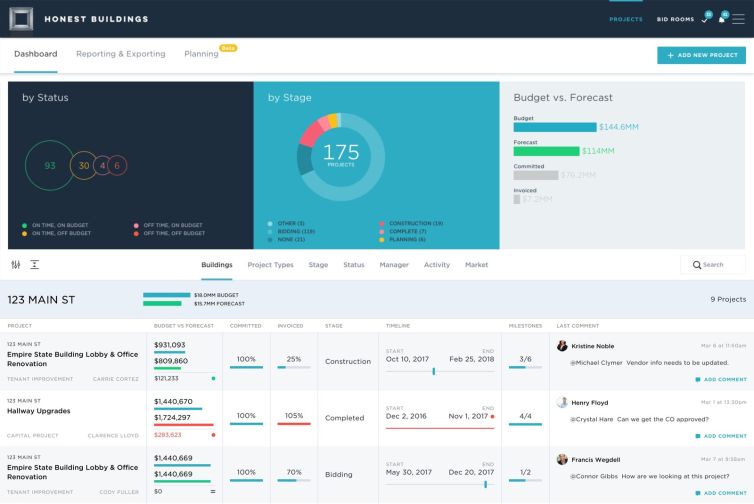 Honest Buildings, a startup that provides a project management platform for real estate owners, has received an additional $3.5 million in funding, expanding its previously announced Series B financing round to $25 million, Commercial Observer has learned.

“As a fiduciary of our investors’ capital, QuadReal is always looking for the most effective ways to enhance service, asset value, performance and returns,” Dennis Lopez, the CEO of QuadReal, said in a prepared statement. “Honest Buildings is fundamentally improving the way that real estate owners plan and manage capital investment throughout their portfolios, creating real-time visibility and ultimately better outcomes.”

Since its founding in 2012, Honest Buildings has raised $43 million, a spokeswoman said. Other Series B investors include Brookfield Property Partners, Oxford Properties Group, Durst Organization, DivcoWest Real Estate Investments, Rudin Ventures (the venture arm of Rudin Management Company) and various venture capital firms, according to a Feburary Honest Buildings news release about the Series B funding round.

Honest Buildings’ platform was used in about $10 billion in projects over the past two years. Via its application, landlords and developers can track capital expenditures for their projects in order to prevent overspending and manage payments to vendors.

“I think it’s a really well-run company,” Robert Courteau, the CEO of Altus Group, explained. “It’s in a category that is fairly important and growing, and with all of the redevelopment that is going on with real estate assets the ability to track capital costs with a modern platform is a real positive.”

The initial funding round didn’t include Altus Group and QuadReal, because they weren’t ready, Courteau said. As a result, Honest Buildings kept the funding round open.

Honest Buildings started in New York but its platform is now being used for properties in 45 states and five provinces in Canada. The company currently has 70 employees, doubling its total within the past 12 months. With the new funding executives of the company are planning to double Honest Buildings’ headcount again within the next two years and expand to even more areas on the continent. Its corporate offices are located at 115 Broadway between Cedar and Pine Street in the Financial District.

“We are continuing to grow across North America and beyond,” Riggs Kubiak, the founder of Honest Buildings, told CO.

He added, the company is going to specifically hire more engineering and design personnel “in order to make the technology not only have more features and resources for owners, but [also] to make it even easier to use.”