Law Firms Are Taking a Second Look at Their Offices 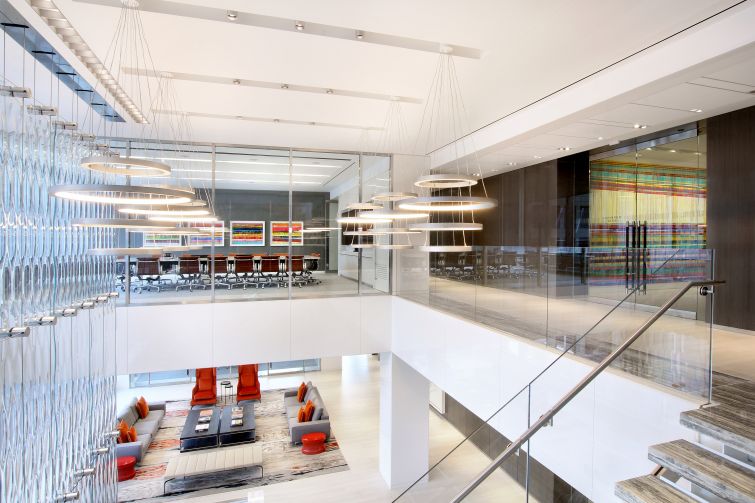 Recently, the walls of law offices have been breaking down—quite literally.

And while most law firms have been slow to follow the modern office trends, such as using more wireless technology or taking advantage of open floor plans, the industry has begun to switch gears. As proof, within the past year big names like White & Case and Skadden, Arps, Slate, Meagher & Flom LLP have signed leases to relocate to smaller, more efficient spaces or downsize in their current ones.

“The law firm industry is going through a significant transition,” Ted Rotante, an executive managing director at Colliers International, told Commercial Observer. “What they are doing is going floor by floor and rebuilding their space. The general trend is to take less space and improve your efficiency.”

In the coming years, the only firms that will add more square footage are ones that recently acquired other organizations or smaller firms on a growth path, according to Mr. Rotante.

Otherwise, law firms are all focused on lowering rentable square feet per attorney, the industry standard for determining space needs. While it wasn’t hard to find New York City firms that had 1,000-square-feet-per-attorney ratios a decade year ago, most offices today are being designed at around an average of 550 to 650 square feet per attorney, and many are looking to reduce that number even further, experts said.

Law firms are taking office space at a rate of $76.75 per square feet in Manhattan, the highest of any city surveyed in Colliers International’s 2015 report on law firms in North America released in April. That rate was an 11 percent jump from 2014.

To help make spaces more efficient, firms are moving to more modern buildings and spaces, to take advantage of wide-open, column-free floor plates that allow for more efficient design. The new spaces are also appealing to firms because they provide the most up-to-date technology and superfast connectivity.

A case in point, global giant Skadden, Arps signed a lease earlier this year for about 550,000 square feet at Brookfield Property Partners’ planned 1 Manhattan West tower. It is roughly 300,000 square feet smaller than its current headquarters at Durst Organization’s 4 Times Square, according to a spokesman from JLL, which brokered the deal for the new space. Representatives from the law firm did not want to speak about plans for the new space.

Firms are choosing to relocate to smaller offices and then redesign their spaces to make them more efficient. White & Case, another industry heavyweight, signed a lease in the spring of 2014 to move from its 300,000 square foot space at 1155 Avenue of the Americas to one that’s about 50,000 square feet smaller at 1221 Avenue of the Americas, the JLL spokesman said. (They’ll be moving in 2017.)

“We can do a lot more with a little less space at 1221,” White & Case spokesman Erik Hendrickson, said in an email, declining to be specific. “The floor plan at 1155 was a little constricting. Being able to build from scratch on floors that are much larger at 1221 allows for a tremendous amount of flexibility in what we are trying to accomplish in terms of creating an innovative and collaborative space.”

So how else do firms best use rentable square feet per attorney? They are cutting the non-essential parts of their offices and adding more flexible space. Libraries and file cabinets are being digitized. Sections for storage, marketing and billing and financial are being placed in lower levels of buildings where rents are cheaper or outsourced in properties in other cities.

The presence of millennials is also making a big difference in how firms are approaching their spaces. Since younger attorneys are more tech-savvy they require less help from administrative assistants.

“In the ratios between professionals and assistants, the gap is getting wider and wider,” said David Goldstein, an executive vice president at Savills Studley. “Where an administrative assistant used to service three or four attorneys, now they are serving eight or 10.”

Mr. Goldstein was part of the Savills Studley team that represented law firm Kirkland & Ellis when it signed a 20-year lease extension this year for more than 400,000 square feet in 601 Lexington Avenue. Although the firm had added more attorneys, it chose not to add more square footage in its office.

Assistants’ spaces and areas once reserved for receptionists are now being used for additional attorneys and common spaces, such as conference rooms, pantries and cafeterias.

And these common areas are being designed with an eye toward flexibility, so they can be used as meeting or dining space, and a place where attorneys can meet more informally. This could help promote collaboration, which will help workflow, experts say.

“Law firms are realizing that collaborating, bumping into each other, is good,” said Paul Myers, an executive vice president of CBRE who handles many law firm transactions.

And most surprising of all, the legendarily massive corner office awarded to a partner is also becoming something of a throwback. Larger private offices are being reduced and even smaller offices for associates are being dispensed with altogether in some cases.

Late last year, Weil, Gotshal & Manges LLP signed a lease renewal in the 50-story General Motors Building at 767 Fifth Avenue for about 390,000 square feet of space, but gave up about 20 percent of their square footage. The move is scheduled for 2019, and Weil will gut renovate the entire space to reconfigure its office for more attorneys despite the shrinkage in space. Partner offices will be marginally reduced, and glass walls will be added for more openness.

“I think that the concept when I started—and not necessary at my firm but a lot of firms—was large partner offices and lots of closed doors and a lot of files throughout the middle of the law firm’s space,” said Philip Rosen, a partner at Weil, Gotshal & Manges and co-head of the real estate practice. “And I’m sure some firms continue to [follow] that concept, but for us the concept of openness is really important in our renovation.”

One can assume a more open layout, but not that offices will disappear altogether.

“Open plan is something that I know other firms [in other industries] are trying,” Mr. Rosen continued, “I’m assuming law firms will in the future. It’s harder for law firms, because of the seriousness of secrecy and confidentiality.”

Paul Hastings is moving from its 240,000-square-foot offices at 75 East 55th Street to a roughly 180,000-square-foot space in the MetLife Building at 200 Park Avenue. It’s a loss of 25 percent of space, but where it will save some square footage is with what’s being called the “end zones” for first- and second-year associates.

End zones—something exclusive to Paul Hastings—are somewhere in between a desk and a cubicle, reported The Wall Street Journal recently, where associates will be packed together as part of a plan to create a more efficient and collaborative workplace environment. So far, nobody else has announced that they’ll be following Paul Hastings’ lead. At least not yet.

“There are firms that are willing to not just catch up [but] jump ahead. They are willing to be first,” said Julia Simet, a managing director of Gensler, the architecture firm that also designed Paul Hastings’ space. “Ten and 15 years ago nobody wanted to be first. And now things are changing so quickly.”