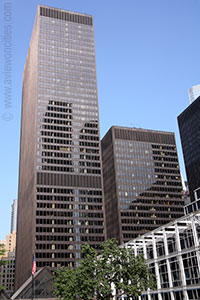 Five commercial properties in big cities around the country had their loans fully defeased this week, Mortgage Observer has learned.

Data obtained and provided by the commercial real estate and financial research firm Trepp shows that the properties in Chicago, Boston, Seattle, Dallas and Washington, D.C., carried balances totaling $390.4 million. Defeasance provisions allowed the borrowers to swap out the loans with Treasury securities that replicate the cash flows of the loan.

The largest of the defeasances was on the Chicago office complex Michigan Plaza at 205 and 225 North Michigan Avenue, owned by a venture of the London investor Sir Joseph Hotung. The defeased loan, which had a current balance of $170.3 million and a balance at securitization of $179.5 million, made up 11.5 percent of the Morgan Stanley CMBS deal MSC 2011-C1.

The second largest transaction involved D.C. office property Station Place II at 600 2nd Street, NE, owned by New York-based Louis Dreyfus Property Group. The defeased loan, which had a current balance of $94.2 million and a balance at securitization of $105.9 million, made up 8.9 percent of the UBS deal LBUBS 2006-C3.

The third largest of the defeasances was on the Boston office building One Summer Street, owned by Markley Group LLC. The defeased loan, which had a current balance of $75.2 million and a balance at securitization of $82 million, made up 3.9 percent of the Citigroup deal CWCI 2007-C2.

The other two transactions were on Craig Schafer’s Hotel Andra at 2000 Fourth Avenue in Seattle and Denver-based Grand Peaks Properties’ apartment complex Grand Estates at Kessler Park, formerly Jefferson at Kessler Park, at 1520 North Beckley Avenue in Dallas. Those properties had current balances of $26.5 million and $24.2 million, respectively.

“Lower interest rates coupled with a recovery in property fundamentals and appraised values have made defeasance an option for many commercial real estate borrowers who wish to lock in a lower rate or take cash out of their properties,” said Trepp Research Analyst Sean Barrie.

“Many borrowers have wanted to snag lower rates because of the potential impact of the ‘wall of maturities’ taking place from now until 2017,” he said.